What does Mia mean?

[ 2 syll. mia, mi-a ] The baby girl name Mia is pronounced as MIY-ah in English or MIY-aa in Dutch, German and Scandinavian †. Mia is largely used in Dutch, English, German, and Scandinavian. It is derived from Hebrew origins.

Mia is a Dutch, English, German, and Scandinavian shortening of Maria.

Mia is also an English and Scandinavian diminutive of the name Mary (English).

Mia is also an English variant transcription of Michaela.

Mia is very popular as a baby girl name, and it is also perceived as fairly trendy. The name's popularity has been increasing since the 1960s; before that, it was of sporadic use only. At the recent height of its usage in 2015, 0.766% of baby girls were named Mia. It had a ranking of #6 then. In 2018, its usage was 0.685% and its ranking #7, and it was the most popular within all girl names in its family. In 2018, Mia was 5 times more frequently used than the next most popular name, Maria. 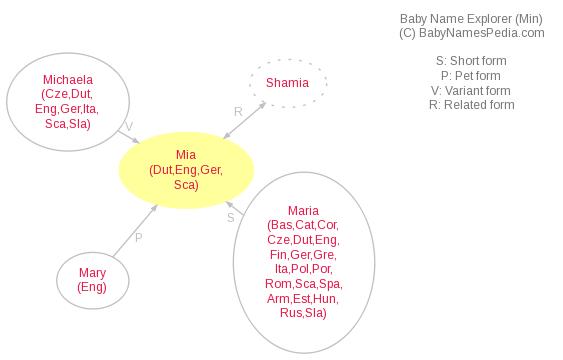