What does Micah mean?

[ 2 syll. mi-cah, mic-ah ] The baby boy name Micah is sometimes used as a girl name. It is pronounced in English as MAY-Kah †. Micah is used chiefly in the English, German, Hebrew, and Welsh languages, and its origin is Hebrew. Biblical name: The name was borne in the Bible by the 8th-century BC minor prophet; he wrote the book bearing his name and prophesied the destruction of Jerusalem. It was first adopted by English Puritans in the 17th century. The name was later popularized by the Arthur Conan Doyle novel Micah Clarke (1889).

In addition, Micah is a contraction of the name Micaiah (English and Hebrew) in the English, German, and Welsh languages.

Micah is also a variant of the name Michael (Czech, English, French, German, and Yiddish) in the Hebrew language.

Micah is a popular baby name for boys. The name's popularity has been growing since the 1950s; before that, it was of very light use only. Its usage peaked modestly in 2018 with 0.193% of baby boys being given the name Micah. It ranked at #103 then. In 2018, among the group of boy names directly linked to Micah, Michael was the most regularly used. The name was thrice as popular as Micah in that year. In the past century Micah has mostly been a baby boy name. In 2017, the name Micah was given to 13 times as many baby boys than girls. 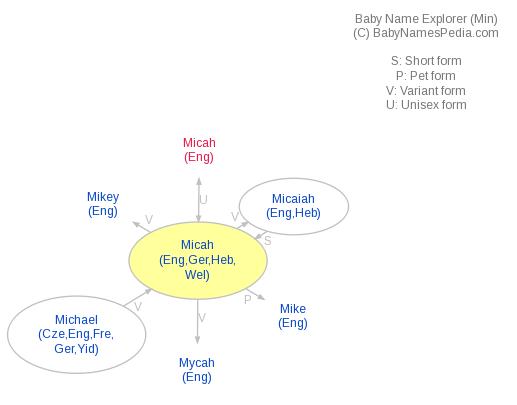