What does Michelle mean?

[ 2 syll. mic-hel-le, mi-che-lle ] The baby girl name Michelle is also used as a boy name, though it is far more popular for girls. It is pronounced Mih-SHEHL in English or Miy-SHEHL in French †. Michelle is of Hebrew origin. It is used mainly in English, French, and German. The name developed via Michèle, the French feminine equivalent of Michel. The name Michele was first adopted by English speakers in the mid 20th-century, but the Anglicized spelling Michelle became more widespread. The latter was in part popularized by the Beatles song Michelle (1965).

Michelle is an English, French, and German form of Michaela.

What are the Variant Forms of Michelle?

See also the related forms, the English, French, and Italian Rachelle and the English Trishelle.

Michelle is popular as a baby girl name. The name increased in popularity from the 1930s up to the 1960s; prior to that, it was of only irregular use. At the height of its usage in 1969, 1.948% of baby girls were named Michelle. It had a ranking of #2 then. The baby name has markedly slipped in popularity since then. In 2018, it ranked at #263 with a usage of 0.067%, but it was nevertheless the most popular within all girl names in its family. Michelle was twice as popular as the 2nd ranked name, Michaela, in 2018. Michelle has in the last century been mainly given to baby girls. There were 214 times more baby girls than boys who were named Michelle in 1983. 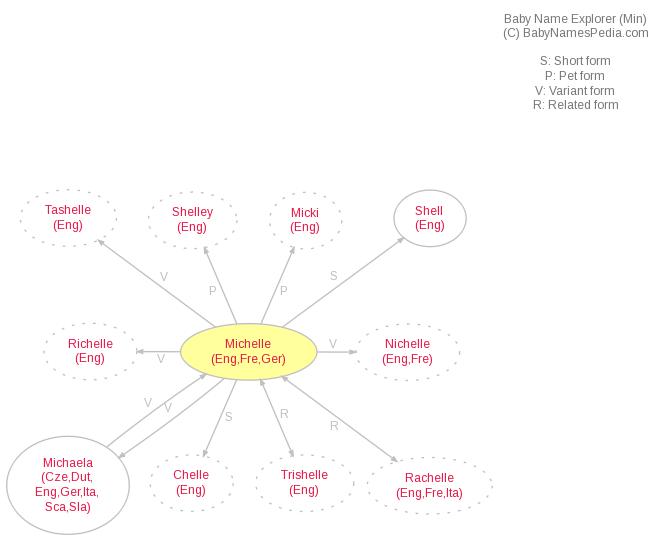