What does Millard mean?

[ 2 syll. mil-lar(d), mi-lla-rd ] The baby boy name Millard is pronounced MIHL-aaRD †. Millard's origin is Old English and English, and its use, English. From Old English roots, its meaning is 'guardian of the mill'. It is derived from mylen meaning 'mill' ; weard 'warden, guard'. An older form of the name is Millweard (Old English). The name was borne by the thirteenth US president, Millard Fillmore (1800-1874).

In addition, Millard is a form of the English Miller.

Millard is uncommon as a baby name for boys. At the height of its usage in 1904, 0.056% of baby boys were named Millard. It ranked at #210 then. The baby name has since dropped out of favor, and is used only on a very modest scale now. In 2018, within the group of boy names directly related to Millard, Miller was the most frequently used. 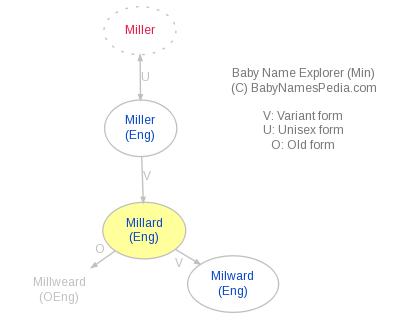