What does Mira mean?

Mira is of Latin origin. It is used mainly in the Arabic, Czech, Dutch, English, Hebrew, Indian, Polish, and Slavic languages. It is derived from the word mirus which means 'wonderful'.

Mira is a widely used name; it has 22 variations that are used in English and foreign languages. Variations of the name used in English include Meara, Mir, Mirae, Mirah, Mirana, Mireille, Mirella, Mirelle, Miri, Miriana, Mirielle, Mirilla, Mirke, Mirko, Mirra, Myrella, Myrene, Myria (used in Spanish as well), and Myrilla. Meera (Indian) and Mirya (French) are foreign variations of Mira. Another foreign variant is the familiar form Mirka (Italian).

Mira's language of origin is Slavonic and it is predominantly used in the Slavic language. It is derived from the word meri meaning 'great, famous'. The name evolved as a short form of other Slavic names with the first element 'meri'.

Mira is used mostly in the Indian language and its language of origin is Sanskrit. Meaning: prosperous.

The Indian name Meera is a derivative of Mira.

In addition, Mira is a variation of Meira (English).

Mira is also a variation (English and Spanish) of Mirabelle (English, French, and Spanish).

Mira is also a contraction of Miranda (English, German, and Italian).

Mira is also a variation of Myra (English).

Mira is a rather popular baby girl name. The name's popularity has been growing since the 2000s. Its usage peaked recently in 2018 with 0.036% of baby girls being given the name Mira. It had a ranking of #465 then. Among all girl names in its family, Mira was the 2nd most popular after Miranda in 2018. It was more widely used than Mira by 28% in that year. 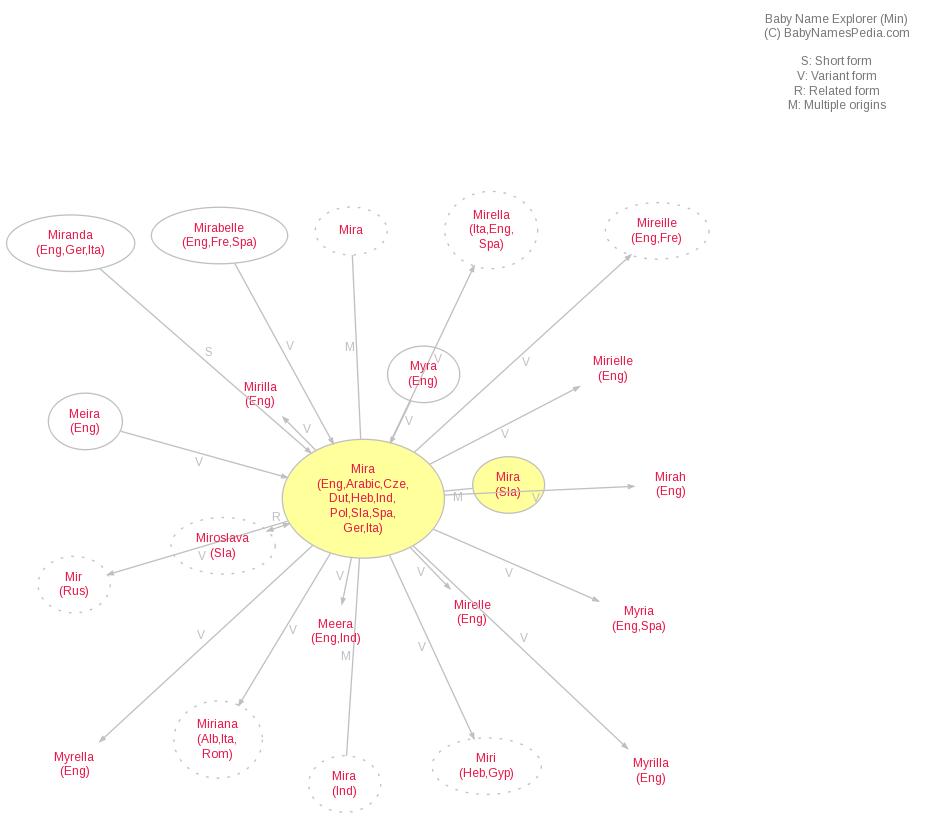