What does Miriam mean?

[ 3 syll. mi-riam, mir-i-am ] The baby girl name Miriam is pronounced MIHR-iy-ahM (English) †. Miriam is of Hebrew origin. It is used mainly in the English, French, German, Yiddish, and Hebrew languages. Biblical name: Old forms of Miriam include Maryam (Aramaic), Miriam (Hebrew), and Miryam (Hebrew). The name is of uncertain etymology; it shares the same origin as Mary. It has appeared in the Old Testament of the Bible as the name of a prophetess who was the elder sister of Moses and Aaron. As the latter two names are possibly of Egyptian origin, Miriam could also share the same derivation. Owing to the biblical association, the name has long been popular with the Jews. English speakers have adopted the name since the 17th century.

Miriam is a variant form of the English Mary in the English, French, German, and Yiddish languages.

Variant forms share the origin and thus the meaning of the name Miriam.

See also the related forms, the name Mary and the Arabic and Turkish Meryem.

Miriam is an all-time favorite. At present it is still rather popular as a baby girl name, but not to the degree it was before. At the peak of its usage in 1917, 0.143% of baby girls were given the name Miriam. It had a ranking of #134 then. The baby name has experienced a drop in frequency since then, and is in recent years of modest use. In 2018, it ranked at #303 with a usage of 0.059%, but it was nonetheless the 2nd most popular after Mary, out of all girl names in its family. The name was twice as popular as Miriam in 2018. 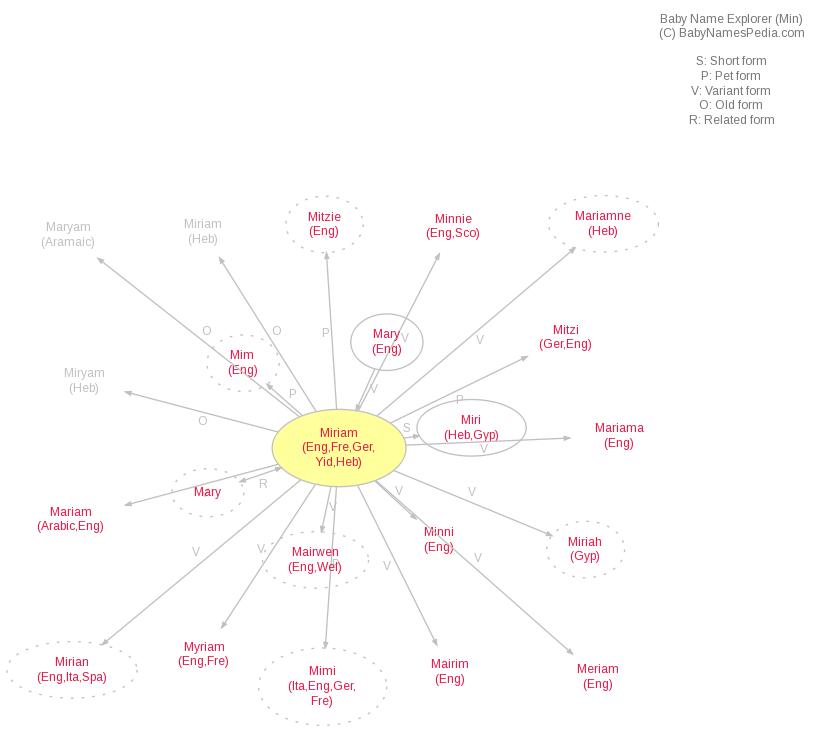