What does Misael mean?

[ 2 syll. mi-sae(l), mis-a-el ] The baby boy name Misael is pronounced Miy-SEY-L †. Misael is of Hebrew origin. It is used mainly in English, German, and Spanish. The meaning of Misael is 'who is what God is?'. It is a biblical name derived from miy which means 'who' ; el 'God, powerful'. An old form of the name is Meshach (Hebrew). The name was borne in the Book of Daniel of the Bible by a young man who refused the orders of King Nebuchadnezzar to worship a golden idol.

Misael is a derivative of the Czech, English, French, German, and Yiddish Michael.

Misael is also a derivative (English and Spanish) of the Hebrew and English Mishael.

Derivatives of Misael include the Slavic Misail, the German Mischael, the Hebrew Mishael, and the name Missael. 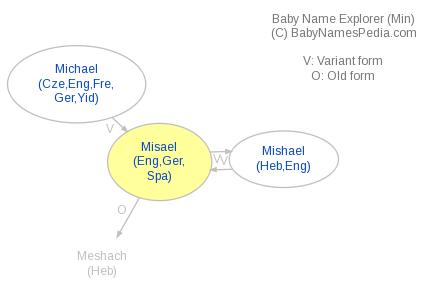