What does Mitchell mean?

[ 2 syll. mit-(c)hel(l), mi-tche-ll ] The baby boy name Mitchell is pronounced as MIHK-ehL †. Mitchell is used predominantly in the English language, and its origin is Hebrew and Old French. The first name is derived from the Norman French surname, itself a medieval form of Michael under the influence of an Anglicized pronunciation of its variant Michel.

Mitchell is a variation (English) of the name Michael (Czech, English, French, German, and Yiddish).

Both the origin and meaning of Mitchell is inherited by all variant forms.

Mitchell is a classic favorite. Today it is still fairly popular as a baby name for boys, though it was in more widespread use previously. At the modest height of its usage in 1994, 0.264% of baby boys were given the name Mitchell. It ranked at #71 then. The baby name has since experienced a marked loss in popularity, and is in recent years of occasional use. In 2018, its usage was only 0.020% and its ranking #649. Within the group of boy names directly linked to Mitchell, Michael was the most frequently used. In 2018, it was used 30 times more than Mitchell. 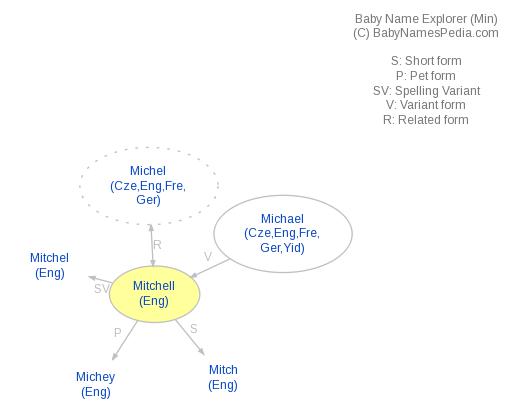