What does Moe mean?

[ 1 syll. moe, mo-e ] The baby boy name Moe is sometimes used as a girl name. It is pronounced as MOW- †. Moe is used predominantly in the English language, and it is derived from Germanic, Latin, and Egyptian origins.

Moe is a pet form (English) of the name Elmo (English, Italian, and Latin).

Moe is also a contraction (English) of the name Maurice (English and French).

Moe is also a variant of the name Mo (English).

Moe is also a contraction (English) of the name Moses (English and German).

Moe is unusual as a baby name for boys. Its usage peaked modestly in 1904 with 0.010% of baby boys being given the name Moe. Its ranking then was #636. The baby name has since experienced a substantial loss in popularity, and is currently of sporadic use. In 2018, among the group of boy names directly linked to Moe, Moses was the most frequently used. Moe has predominantly been a baby boy name in the past century. 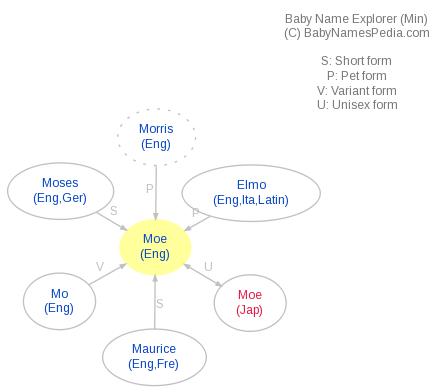