What does Moira mean?

[ 2 syll. moi-ra, mo-ira ] The baby girl name Moira is pronounced as M-OYRaa- †. Moira is of Hebrew and Celtic origin. It is used mainly in English, Irish, and Scottish. The name is Anglicized from Máire. There was an obscure 4th-century martyr named Saint Maura. The name Moira has been adopted in the English-speaking world since the 19th century, especially in Scotland.

In addition, Moira is an English, Irish, and Scottish form of the English Mary.

Moira is also an English form of the English and Irish Maureen.

Moira is also an English, Irish, and Scottish form of the Gaelic and Irish Máire.

Variant forms inherit the origin and meaning of the name Moira.

See also the related form, the Gaelic and Irish Máire.

Moira is unusual as a baby girl name. Its usage peaked modestly in 1965 with 0.008% of baby girls being named Moira. It was #833 in rank then. The baby name has dropped in popularity since then, and is of only irregular use now. Among the family of girl names directly related to Moira, Mary was the most widely used in 2018. 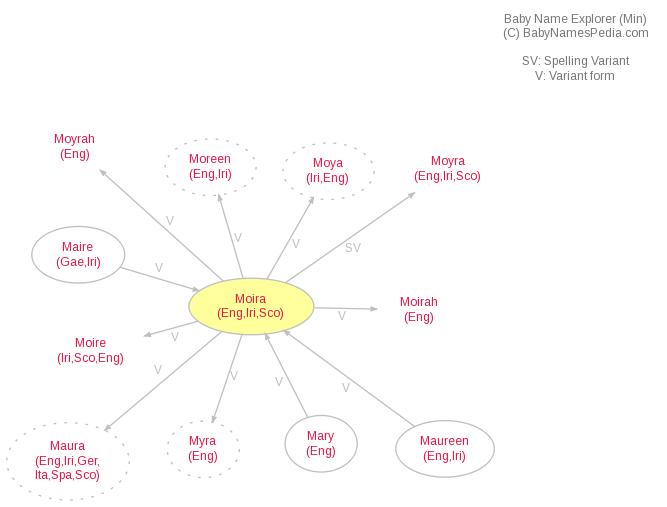