What does Molly mean?

[ 2 syll. mol-ly, mo-lly ] The baby girl name Molly is pronounced as MAOLLiy- †. Molly is used predominantly in English and Irish. It is derived from Hebrew origins. The name first evolved as an 18th-century diminutive of Mary via the older form Mally (Middle English). The change of the '-r-' to '-ll-' is reflected in other English names including Sally.

The name was known from the virtuous 18th-century London barmaid Molly Mog, about whom John Gay wrote in his ballad Fair Maid of the Inn (1726). Molly was also used by Henry Fielding for the name of a gamekeeper's daughter in his novel The History of Tom Jones, a Foundling (1749), reflecting a growing association of the name with maids at the time. A short form of the name has also been made known by the Daniel Defoe novel Moll Flanders (1722), which has since been adapted into a film (1996). In Ireland, the name is well-known from Molly Malone, a popular song based on a beautiful street hawker who lived in 17th-century Dublin. In recent times, the name has been bestowed by the Irish author James Joyce on the fictional Molly Bloom in his novel Ulysses (1922). The name has often been associated with Ireland despite its etymology.

Molly is a familiar form (English and Irish) of the name Mary (English).

The origin and thus the meaning of Molly is inherited by all variant forms. 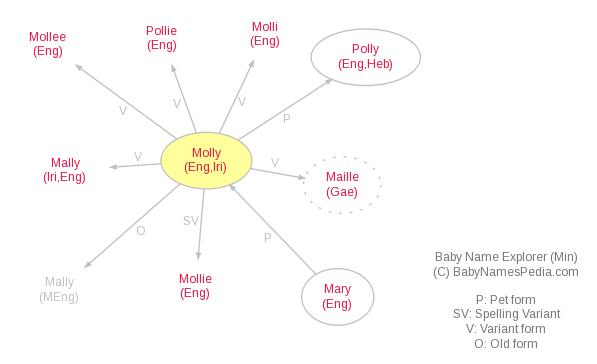