What does Mona mean?

[ 2 syll. mo-na, mon-a ] The baby girl name Mona is also used as a boy name, though the use for girls is far more popular. It is pronounced MOWNAH †.

Mona's language of origin is Celtic. It is predominantly used in English, Irish, Manx, and Welsh. The name is Anglicized from the Gaelic Muadhnait (Old Irish), itself a feminine diminutive of muadh (meaning 'good, noble'). The name had a strong Irish flavor initially, but it has since the late 19th century been adopted by other English speakers. It is sometimes associated with the Greek monos ('single, only'). In Scotland, it represents a feminine form of Tormod.

Mona has 14 forms that are used in English and foreign languages. English forms of the name include Moina, Moinah, Monah, Monalisa, Monalissa, Monalysa, Monalyssa, Mone, Monea, Monna, Moyna, Moynah, and Muna. The Welsh Mon is a form of Mona that is used in foreign languages.

Mona is of Arabic origin. It is used mainly in Arabic and Iranian. Here, it means 'wish, desire'.

A form of the name is the Arabic, English, Greek, Irish, Scandinavian, and Scottish Mona.

In addition, Mona is a form (Arabic, English, Greek, Irish, Scandinavian, and Scottish) of the Arabic and Iranian Mona.

Mona is also a form (Arabic) of the Arabic, Indian, Spanish, African, and Swahili Muna.

Mona is also a diminutive (Arabic, English, Greek, Irish, Scandinavian, and Scottish) of the German and Spanish Ramona.

Mona is uncommon as a baby girl name. At the modest height of its usage in 1950, 0.062% of baby girls were named Mona. It was #230 in rank then. The baby name has substantially slipped in popularity since then, and is used only on an infrequent scale now. In 2018, within the family of girl names directly related to Mona, Monica was the most popular. 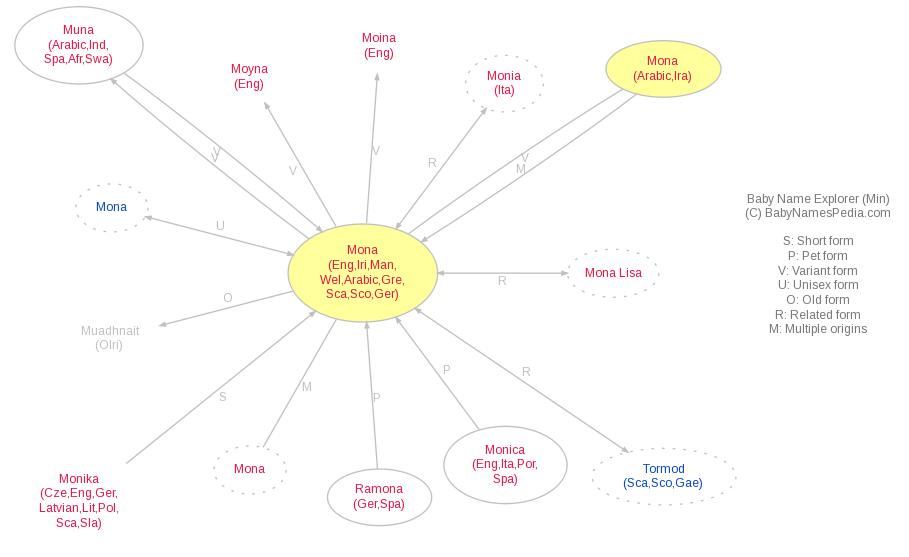