What does Mordechai mean?

[ 4 syll. mor-dec-hai, mo-rdech-ai ] The baby boy name Mordechai is pronounced as MaoRDeh-KEY-ay †. Mordechai is used predominantly in the English and Hebrew languages, and its origin is Hebrew. The name is of the meaning little man. Its meaning is derived from the element 'mordelhai'.

Mordachai, Mordecai (English), and Moti (Indian) are variations of Mordechai.

Mordechai is somewhat popular as a baby name for boys. The name's popularity has been rising since the 2010s. At the recent peak of its usage in 2018, 0.015% of baby boys were given the name Mordechai. Its ranking then was #792. Out of all boy names in its group, Mordechai was the most widely used in 2018. 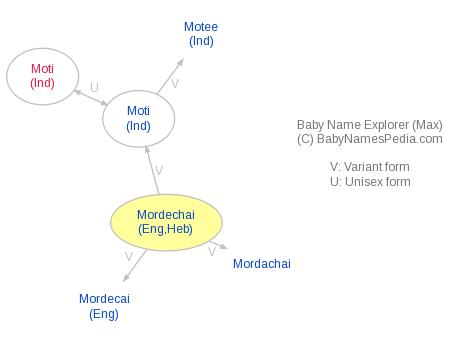