What does Mortimer mean?

[ 3 syll. mor-ti-mer, mo-rtim-er ] The baby boy name Mortimer is pronounced MAORTiy-M-er †. Mortimer's language of origin is Old French and it is used mainly in the English language. The first name is derived from the English surname, which is itself from a Norman place name with the elements morte and mer meaning 'dead sea', possibly in reference to a place with a stagnant lake or marsh. The name was famously borne by the lords of Mortemer in Normandy. The given name was first adopted only in the 19th century. In literature, it has appeared in the Anthony Trollope novel Doctor Thorne (1858) and the Charles Dickens novel Our Mutual Friend (1864-1865). The name is also used by the Scottish and the Irish as an Anglicized form of Murtagh or Muiriartach, and by Jews as an Anglicized form of Moses.

Mortimer is uncommon as a baby boy name. At the modest height of its usage in 1912, 0.012% of baby boys were given the name Mortimer. It had a ranking of #542 then. The baby name has markedly declined in popularity since then, and is of only sporadic use now. Within the family of boy names directly linked to Mortimer, Moses was the most widely used in 2018. 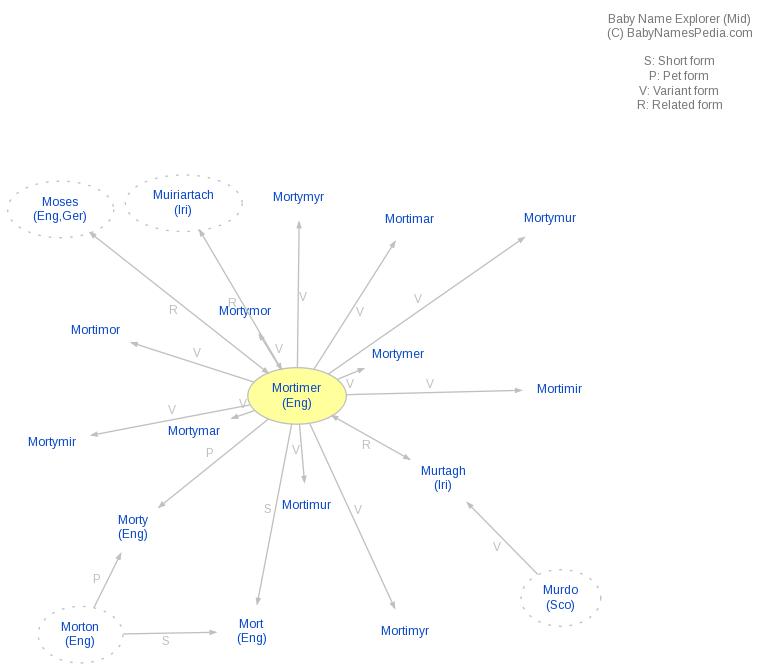