What does Myra mean?

[ 2 syll. my-ra, myr-a ] The baby girl name Myra is pronounced as MAYRaa- †. Myra is used chiefly in English and its origin is also English. Myron (Old Greek) is an original form of the name. The name was invented by the English poet Fulke Greville (1554-1628) as the subject of his love poems; he could have created the name from the Latin 'myrrha', or 'mirari' (meaning to admire, to wonder at), or else as an anagram of Mary to derive a feminine version of Myron. In Scotland, the name is used as an Anglicized form of Mairead. The name was first adopted by English speakers in the 19th century.

In addition, Myra is a variant of the name Moira (English, Irish, and Scottish) in the English language.

Myra has 14 variants that are used in English and other languages. English variants of Myra include Maila, Mayra, Mira, My, Myrah, Myree, Myrena, Myria, Myriah, Myrra, Myrrah, Myrrha, and Omyra. A variant of the name used in other languages is Maira (Hawaiian).

Myra is a classic favorite. At present it is still rather popular as a baby girl name, but not to the degree it was in the past, and it is also perceived as trendy. Its usage peaked modestly in 1942 with 0.067% of baby girls being named Myra. It was #216 in rank then. The baby name has experienced a marked loss in popularity since then. In 2018, its usage was 0.034% and its ranking #491, somewhat regaining its popularity in the recent decade. Among the family of girl names directly related to Myra, Mira was the most commonly used. In 2018, it was 6.745% more frequently used than Myra. 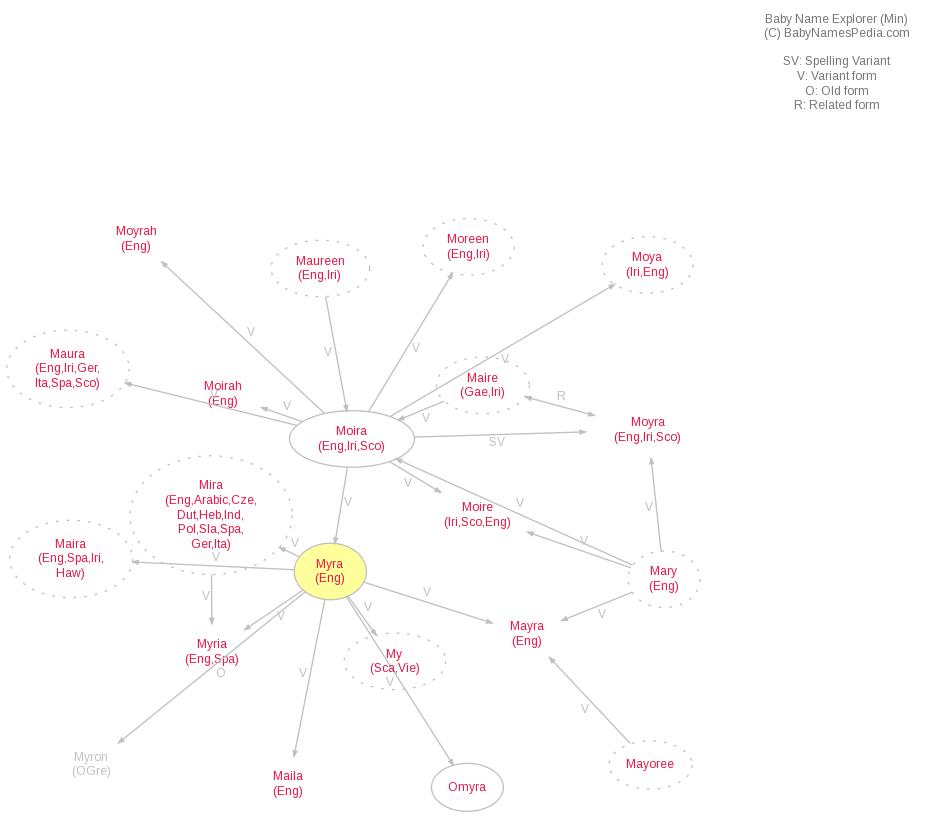