What does Myrtle mean?

[ 1 syll. myr-tle, my-rt-le ] The baby girl name Myrtle is pronounced as M-ERTL †. Myrtle's origin and use are both in the English language. Its meaning is from the elements 'myrtle' ; 'myrtille' ; 'myrtilla' ; 'myrta'. The first name is derived from the plant name of the garden shrub, an ancient Greek symbol of victory. The plant name is from the Old French 'myrtille', the Late Latin 'myrtilla', itself a diminutive of the Latin 'myrta'. The name was, together with other flower names, first adopted by English speakers in the 19th century.

Myrtle is rare as a baby name for girls. At the peak of its usage in 1901, 0.744% of baby girls were named Myrtle. Its ranking then was #28. The baby name has since dropped out of favor, and is today of irregular use. Out of all girl names in its group, Myrtle was nevertheless the most popular in 2018. The name Myrtle has predominantly been a baby girl name, though it has also been given to boys in the past century. In 1903, baby girls named Myrtle outnumbered boys by 66 times. 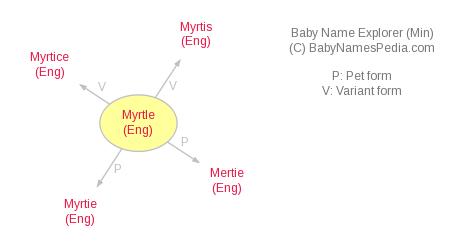