What does Nadezhda mean?

[ 3 syll. na-dez-(h)da, nad-ez-hda ] The baby girl name Nadezhda is pronounced in Russian as Naa-DYEHZH-Daa †. Nadezhda is used mostly in Russian and Slavic. It is of Russian origin. It is derived literally from the word 'nadezhda' which is of the meaning hope. The name was first adopted for the theological associations of its meaning. The pet forms of the name, such as Nadia, are more well known today. Prior to the 20th century, the names were almost unheard of among English- and French-speakers. The introduction of Russian names came primarily from the worldwide performances of Sergei Diaghilev's acclaimed Ballets Russes in the early 20th century. Notable bearers in politics include Nadezhda Krupskaya (1869-1939), the wife of the Russian leader Lenin, as well as Nadezhda Alliluyeva-Stalina (1901-1932), the second wife of Stalin. Other bearers include the influential French composer and conductor Nadia Boulanger (1887-1979), the South African writer and activist Nadine Gordimer (1923-), and the Romanian gymnast and multiple Olympic gold medallist Nadia Comaneci (1961-).

Nadezhda is a derivative of Nadia.

Nadezhda is an uncommon baby girl name. It is not in the top 1000 names. In 2018, among the family of girl names directly related to Nadezhda, Nadia was the most widely used.

A baby name that sounds like Nadezhda is the Russian and Slavic name Nadejda. 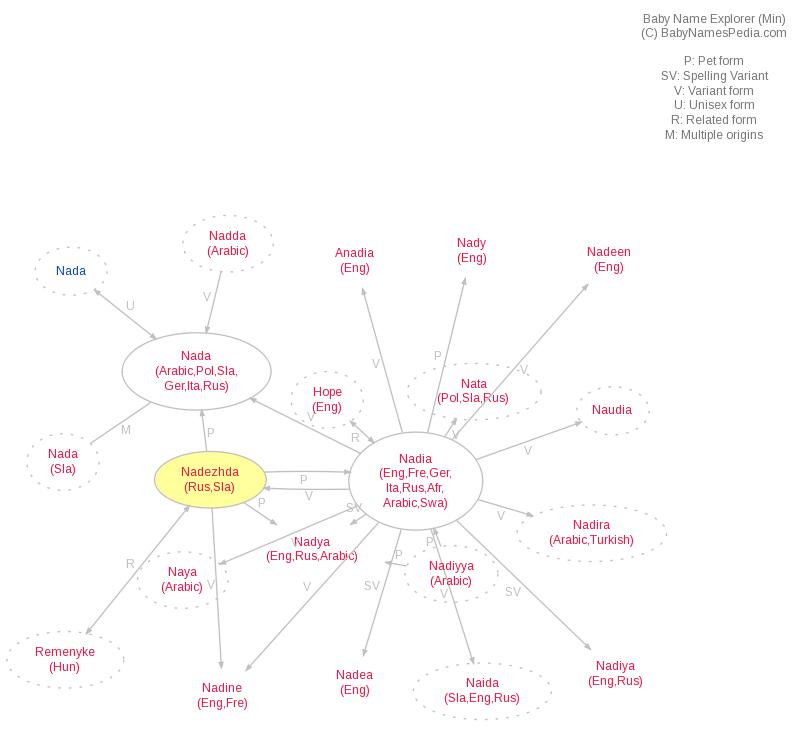