What does Nahum mean?

[ 2 syll. na-hum, nah-um ] The baby boy name Nahum is also used as a girl name. Its pronunciation is NEY-ahM or NEY-HHahM in English †. Nahum is largely used in the English, German, and Hebrew languages, and its origin is Hebrew. The name is of the meaning comforter; full of comfort. A biblical name, it is derived from the element 'nacham' meaning to comfort. The name was borne in the Old Testament of the Bible by a minor 7th-century prophet; he authored the Book of Nahum, in which he foretold the downfall of Nineveh. The name likely originated as a short form of a name describing God as comforter. It has traditionally been popular within the Jewish community; among English speakers, it was widely adopted by the Puritans in the 17th century. The name has been made known by England's poet laureate Nahum Tate (1652-1715), who famously adapted Shakespeare's King Lear with a happy ending.

Nahum is a variant of the name Nahman (English and Hebrew).

Nahum is a rarely used baby name for boys. It is not listed in the top 1000 names. In 2018, within the group of boy names directly linked to Nahum, Nehemiah was the most widely used. 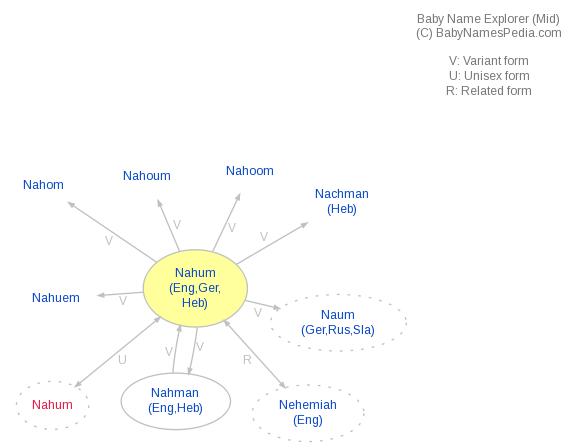