What does Nancy mean?

[ 2 syll. nan-cy, na-ncy ] The baby girl name Nancy is pronounced as NAENSiy- †. Nancy is largely used in English and Dutch, and it is derived from Hebrew origins. The name is of uncertain origin. It probably first came into use as a medieval diminutive of Annis, although it has since the 18th century been used as a diminutive of Anna and subsequently as an independent name. The name has been made known by the titular teenage detective in the Nancy Drew (1930-) series of books for young children. In the later part of the 20th century, the name was famous from Nancy Reagan (1921-), the US first lady. The name has however been sliding in popularity since it came into use as a slang term for an effeminate man or a homosexual.

Nancy is an English pet form of the name Ann (English and Greek).

Nancy is also a pet form of the name Anne (English, French, German, and Scandinavian).

Nainsí (Irish), Nandag (Scottish), Nanette (French), and Nanice (Tongan) are variant transcriptions of Nancy that are used in other languages.

Variant forms inherit the origin and thus the meaning of Nancy.

Nancy is a classic favorite. Currently it is still a somewhat popular baby name for girls, though not to the extent it was before. At the peak of its usage in 1947, 1.784% of baby girls were named Nancy. Its ranking then was #7. The baby name has since suffered a steep fall in popularity, and is in recent times of occasional use. In 2018, its usage was only 0.017% and its ranking #839. Out of the group of girl names directly related to Nancy, Hannah was the most frequently used. In 2018, its use outnumbered Nancy's by 18 times. The name Nancy has been predominantly given to baby girls, though it has also been used as a boy name in the past century. In 1952, 505 times as many baby girls than boys were given the name Nancy. 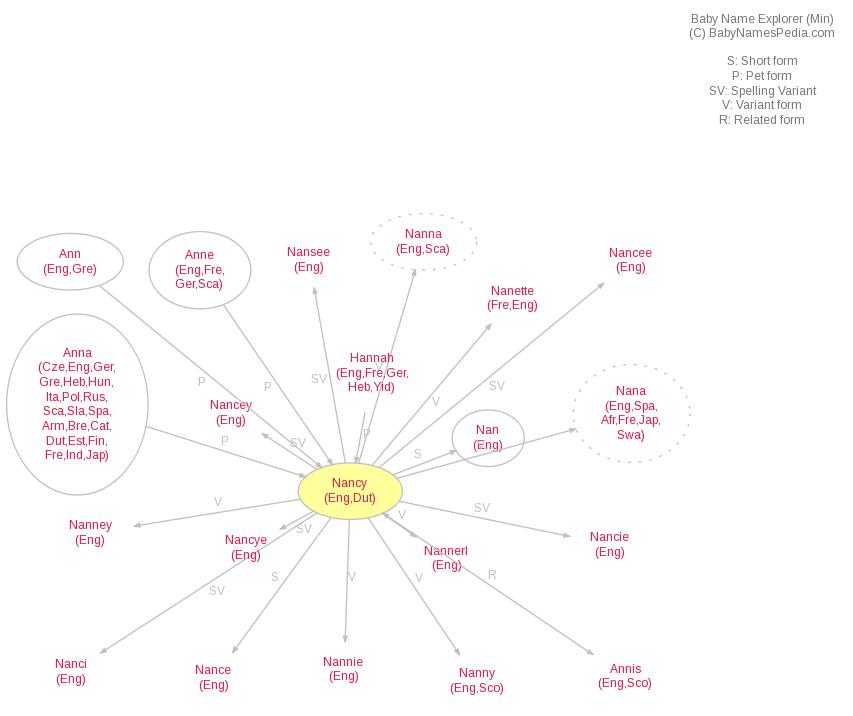