What does Nanna mean?

[ 2 syll. nan-na, na-nna ] The baby girl name Nanna is pronounced NAA-Naa- †. Nanna is of Hebrew, Hawaiian, and Old Norse origin, and it is predominantly used in the English and Scandinavian languages. Old Norse origin, Scandinavian use: It is derived from the element nanp meaning 'daring, brave'. The name was borne in Norse mythology by a goddess and the wife of Baldr; she died of grief after her husband was killed.

In addition, Nanna is a variant of Anna in the English language.

Nanna is also a variant of Nana (English, Spanish, African, French, Japanese, and Swahili) in the English language.

Nanna is also a variant of Nancy (English and Dutch).

Nanna is an infrequently used baby name for girls. It is not listed in the top 1000 names. In 2018, within the group of girl names directly linked to Nanna, Anna was the most widely used. 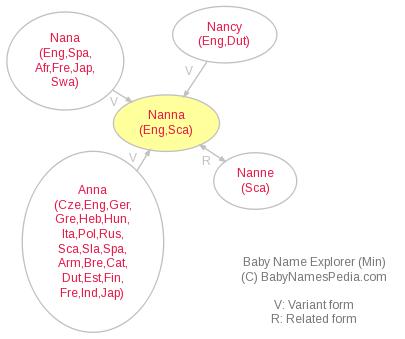