What does Natalie mean?

[ 3 syll. na-ta-lie, nat-al-ie ] The baby girl name Natalie is pronounced in English as NAED-ah-Liy, in French as NaeT-ae-LIY, or in German as NAA-Taa-Liy †. Natalie's language of origin is Latin. It is predominantly used in English, French, and German. The name Natalie means 'born on Christmas'. It is a biblical name from natalis which means 'birthday' ; natale domini 'birthday of the Lord' ; noël 'Christmas'. The name is derived ultimately of the Latin natalis and natale domini. The name has traditionally been popular in Russia in the form Natalya, often given to girls born during the Christmas season. The name was introduced into England at the end of the 19th century, and it is today commonly found outside Russia. Natalie is the feminine form of the Spanish, English, and German Noel.

What are the Variant Forms of Natalie?

Natalie is a very popular baby girl name. The name grew in popularity from the 1900s up to the 2000s. Its usage peaked in 2005 with 0.529% of baby girls being named Natalie. It had a ranking of #18 then. The baby name has experienced a decline in frequency since then. In 2018, it ranked at #39 with a usage of 0.276%, but it was nevertheless the most popular among all girl names in its family. Natalie was 95% more commonly used than the 2nd most popular name, Natalia, in 2018. 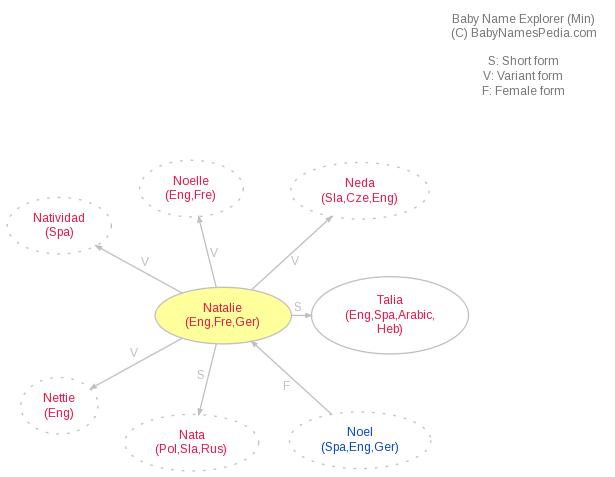