What does Nathan mean?

[ 2 syll. nat-han, na-th-an ] The baby boy name Nathan is pronounced as NEY-THahN in English †. Nathan is used predominantly in the English and Hebrew languages, and it is derived from Hebrew origins. The name is of the meaning gift. A biblical name, it is derived literally from the word 'nathan' which means to give. The name was borne in the Bible by a prophet who criticized David for planning the death of Uriah so as to marry the latter's wife. It was also borne by one of the sons of David. The name was taken up by English Puritans in the 17th century, and it saw a revival in the late 19th century.

In addition, Nathan is a contraction (English) of the name Jonathan (English, German, and Hebrew).

The name Nathania (English) is the female version of Nathan.

Nathan is a very popular baby name for boys. The name's popularity jumped from the 1940s up to the 2000s. At the height of its usage in 2004, 0.693% of baby boys were given the name Nathan. Its ranking then was #20. The baby name has since experienced a fall in popularity. In 2018, its usage was 0.352% and its ranking #48, but it was nonetheless the most popular within all boy names in its group. In 2018, Nathan was more commonly used than the next most popular name, Jonathan, by 19% . 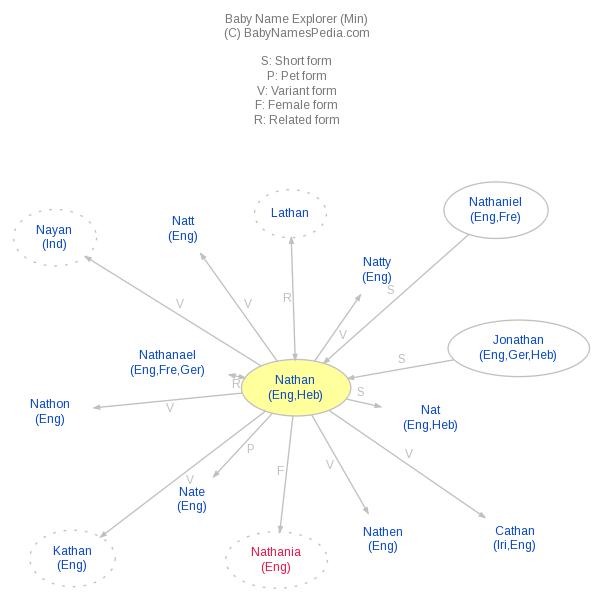