What does Nathaniel mean?

[ 4 syll. nat-ha-niel, na-thani-el ] The baby boy name Nathaniel is pronounced as Ney-THAEN-iy-ahL or Ney-THAEN-YahL in English †. Nathaniel is largely used in the English and French languages, and it is derived from Hebrew origins. The name's meaning is God has given, gift from God. A biblical name, it is derived from the elements 'nathan' meaning to give ; 'el' God, powerful. Nathanael (Hebrew) and Nethaneel (Hebrew) are older forms of Nathaniel. The name appeared in the New Testament of the Bible as Nathanael (Hebrew), another name of the apostle Bartholomew. In the Old Testament, the name Nethaneel was borne by various characters, including one of David's brothers, as well as the prince of the tribe of Issachar during the exodus. The name has been used by English speakers since the Reformation. Its popularity saw a boost from the appearance of the character Sir Nathaniel in Shakespeare's Love's Labour's Lost (1594). The name Nathania (English) is the female equivalent of Nathaniel.

Nathaniel is popular as a baby name for boys. The name's popularity rose from the 1960s up to the 2000s. At the modest height of its usage in 2002, 0.329% of baby boys were given the name Nathaniel. It ranked at #63 then. The baby name has since experienced a loss in popularity. In 2018, its usage was 0.174% and its ranking #116, but it was nonetheless the 2nd most popular after Nathan, within all boy names in its group. In 2018, the name was twice as popular as Nathaniel.

A baby name that sounds like Nathaniel is the name Nathanael (English, French, and German). 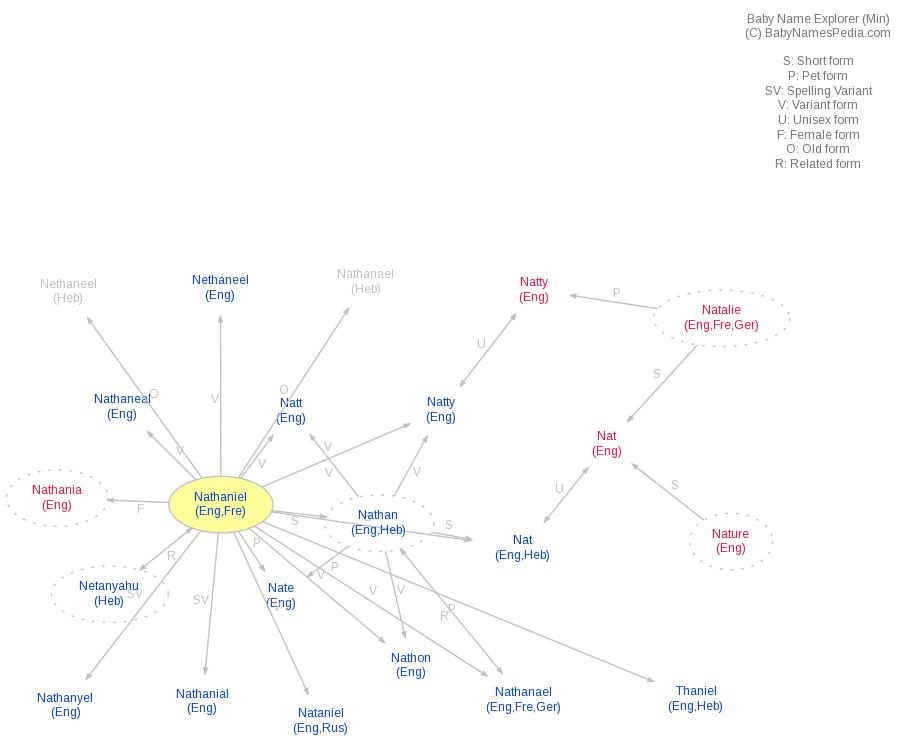