What does Nell mean?

[ 1 syll. nel(l), ne-ll ] The baby girl name Nell is also used as a boy name, though it is far more popular for girls. It is pronounced as NEHL †. Nell has its origins in the Latin, Old Provençal, Old Greek, and Old English languages. It is used largely in English. The name developed as the medieval diminutive of Eleanor, Ellen, and Helen. The initial 'N-' came from the modification of the medieval term of endearment 'mine Ell' to 'my Nell'. Nell has been used as an independent name from the 17th century; it was borne by Eleanor 'Nell' Gwyn (1650-1687), the well-liked mistress of Charles II who was better known by her nickname. In literature, it has been made known by Little Nell or Nell Trent, the fictional heroine of Charles Dickens' novel The Old Curiosity Shop (1840-1841), and Ellen 'Nelly' Dean, the main narrator in Emily Bronte's novel, Wuthering Heights (1847). Nellie the Elephant (1956) was a popular song about a fictional intelligent elephant of this name.

In addition, Nell is an English form of the Dutch, English, German, Italian, and Romanian Cornelia.

Nell is also a familiar form of the English Eleanor.

Nell is also an English familiar form of the Dutch, English, and Scandinavian Ellen.

Nell is also a familiar form of the English Helen.

Nell is unusual as a baby girl name. Its usage peaked modestly in 1902 with 0.088% of baby girls being named Nell. It was #186 in rank then. The baby name has dropped out of favor since then, and is used only on an infrequent scale now. In 2018, among the family of girl names directly related to Nell, Eleanor was the most popular. Nell has primarily been a baby girl name in the last century. 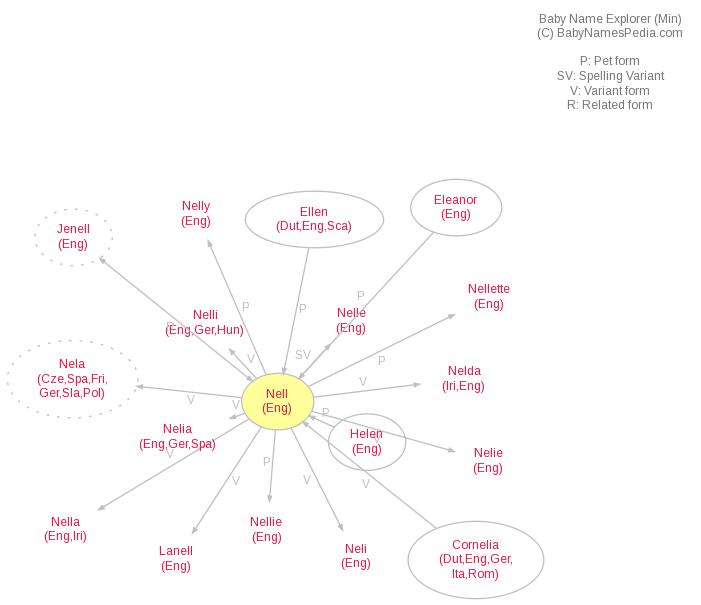