What does Nelson mean?

[ 2 syll. nel-son, ne-ls-on ] The baby boy name Nelson is pronounced as NEHLSahN †. Nelson is a Dutch and English name of Celtic and English origin. From English roots, its meaning is son of Neil, son of Nell - in this context, Nelson can be used in the English language. Its meaning is from the word 'son'. The first name is derived from the English surname meaning 'son of Neil' or 'son of Nell'. It was first bestowed in honor of the celebrated British admiral Lord Nelson (1758-1805), famous for his role in the Napoleonic Wars and for winning the Battle of Trafalgar.

Nelson is a variation (Dutch and English) of the name Neil (Dutch, English, Irish, and Scottish).

Nelson is a classic favorite. Today it is still rather popular as a baby boy name, but not to the degree it was before. At the peak of its usage in 1905, 0.088% of baby boys were given the name Nelson. It was #160 in rank then. The baby name has experienced a loss in popularity since then, and is currently of modest use. In 2018, its usage was 0.019% and its ranking #671. Out of the family of boy names directly linked to Nelson, Neil was the most popular. In 2018, it was 14% more widely used than Nelson. 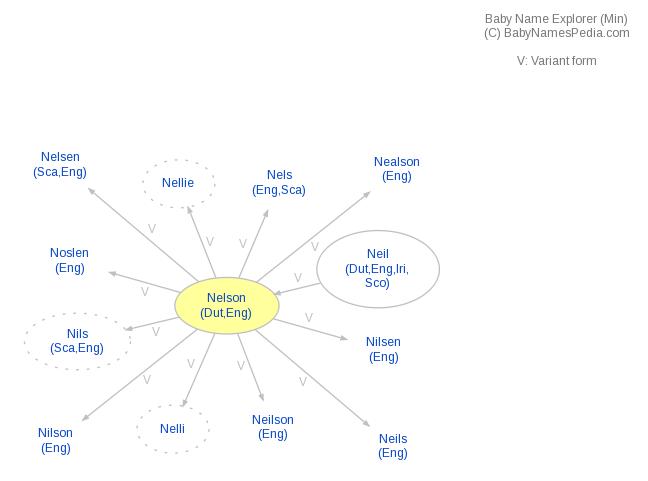