What does Nena mean?

[ 2 syll. ne-na, nen-a ] The baby girl name Nena is pronounced as NEH-Naa- or NIY-Naa- †. Nena is of Hebrew, African-Mende, and Italian origin, and it is predominantly used in the African, English, Italian, Spanish, Swahili, and German languages. From African-Mende roots, its meaning is 'very young, a black-seeded plant with hard fruit' - in this context, Nena can be used in the English language.

In addition, Nena is a variant form of Magdalena in the African, English, Italian, Spanish, and Swahili languages.

Nena is also a variant form of Nina in the English and German languages.

Nena is an unusual baby name for girls. Its usage peaked modestly in 1954 with 0.005% of baby girls being given the name Nena. It ranked at #949 then. The baby name has since experienced a decline in frequency, and is used only on a very light scale today. In 2018, among the group of girl names directly linked to Nena, Nina was the most commonly used. 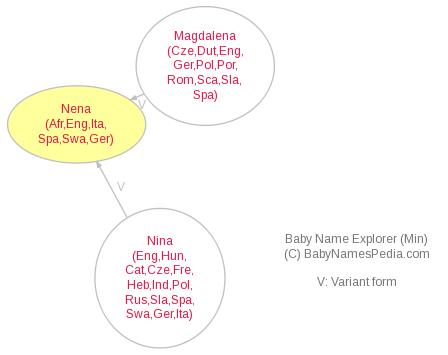