What does Nichelle mean?

[ 2 syll. nic-hel-le, ni-che-lle ] The baby girl name Nichelle is pronounced Nih-SH-EHL- †. Nichelle is of English-American and Old Greek origin, and it is predominantly used in the English and French languages. The name is derived from the combination of Nicole, or the prefix 'Ni-', with the name Michelle. Nichelle Nichols (1932-) was one of the first African American actresses featured in a prominent role in a TV series; she acted in Star Trek (1966-1969).

Nichelle is a variant form of the English, French, and German Michelle in the English language.

Nichelle is also a variant form of the English, German, and Italian Nicola in the French language.

Variant forms share the origin and thus the meaning of the name Nichelle.

Nichelle is a rare baby name for girls. At the modest peak of its usage in 1968, 0.023% of baby girls were given the name Nichelle. It ranked at #485 then. The baby name has since suffered a steep decline in frequency, and is used only on a very light scale today. In 2018, out of the group of girl names directly linked to Nichelle, Nicole was the most widely used. 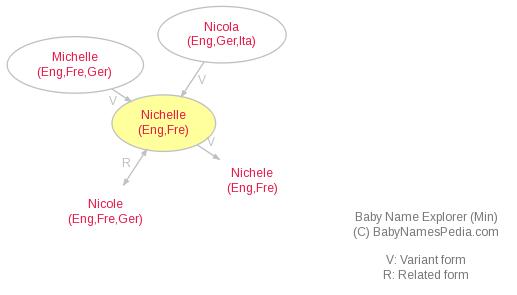