What does Nicholas mean?

[ 3 syll. nic-ho-las, ni-chol-as ] The baby boy name Nicholas is pronounced as NIHK-ah-LahS (English) or Niy-Kow-LAE (French) †. Nicholas is largely used in the English and French languages, and its origin is Old Greek. Nicholaus (Latin) and Nikolaos (Old Greek) are old forms of Nicholas. The name is derived from 'niko', which is itself from 'nike', and 'laos', thus meaning 'victor of the people'.

In Greek mythology, Nike was the winged goddess of victory. Saint Nicholas (270-343) was a bishop of Myra. According to legend, he was known for secretly giving gifts to others, especially his act of leaving money at the windows of three destitute girls for their dowries. The saint's feast day is on Dec 6, thereby he became associated with Christmas. He was later immortalized as Santa Claus, from a variant of the Dutch form of his name, Sinterklaas or Sint-Nicolaas; he is also the patron saint of, among other things, children.

The name was also borne by five popes, two Russian emperors, and the lead character of the Charles Dickens novel Nicholas Nickleby (1838-1839). The name was adopted by English speakers in the 12th century, when it first appeared with the hyper-corrected '-ch-' spelling from the original '-c-'. 'Old Nick' also came into use as an epithet for the Devil, but this could etymologically be from the German 'nickel' meaning 'goblin'. The popularity of the name suffered after the Reformation, but it later saw a revival in the mid-20th century. The name Nicola (English, German, and Italian) is the female equivalent of Nicholas.

What are the Variant Forms of Nicholas?

Nicholas is a widely used name; it has 142 variants that are used in English and other languages. Variants used in English include Collett, Collin, Klaes, Mykola, Neakail, Niccolas, Nichalas, Nichelas, Nichele, Nichlas, Nichlos, Nicho, Nichola, Nicholaas, Nicholaes, Nicholase, Nicholaus, Nichole, Nicholias, Nicholl, Nichollas, Nicholos, Nichols, Nicholus, Nickalus, Nicklas (used in German and Scandinavian too), Nicklaus, Nickleby, Nickson, and Niclasse. Other English forms include the short forms Claus (used in Dutch and German too), Cole, Colin (used in French, and Scottish too), Nic, Nicco, Nichol, Nick, Nico (used in Dutch and German too), Nicol (used in Scottish too), and Nik, the diminutive forms Nickey, Nickie, Nicky, Nikki (used in Dutch and Hungarian too), and Nikko (used in Hungarian too), and the variant spelling Nickolas.

Nicholas is popular as a baby name for boys. The name's popularity rose from the 1900s up to the 1990s; before that, it was of occasional use only. At the peak of its usage in 1995, 1.451% of baby boys were given the name Nicholas. It ranked at #6 then. The baby name has since experienced a fall in popularity. In 2018, its usage was 0.249% and its ranking #74, but it was nonetheless the most popular out of all boy names in its group. In 2018, 44% more boys were named Nicholas than the next most popular name, Cole. Nicholas has mostly been a baby boy name, though in the past century it has also been used for girls. In 1987, the name Nicholas was given to 140 times as many baby boys than girls. 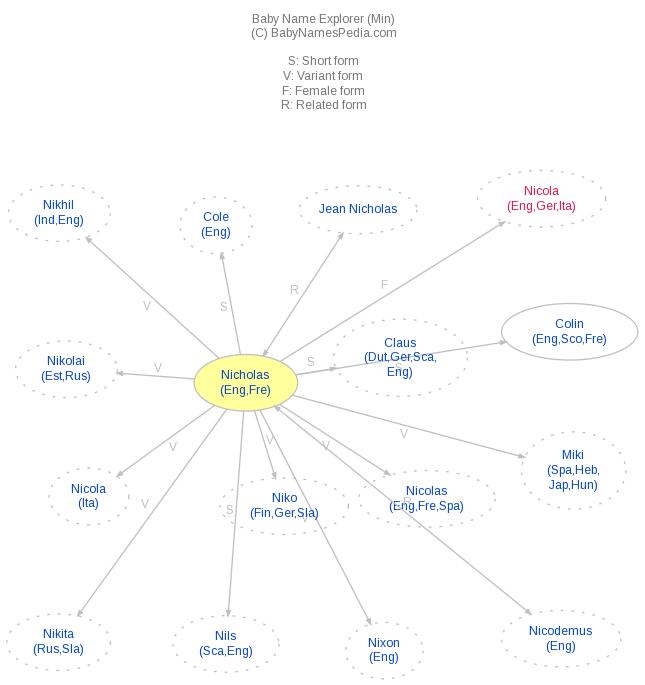