What does Nieves mean?

[ 3 syll. nie-ves, ni-ev-es ] The baby girl name Nieves is pronounced NiyEHVehS †. Nieves is of Spanish origin and it is also used mainly in Spanish. It is a biblical name from the element nieve which is of the meaning 'snow'. The name is derived from one of the many titles of the Virgin Mary, 'María de las Nieves' or 'Nuestra Señora de las Nieves', meaning 'Our Lady of the Snows'. The title refers to the reported 4th century miracle whereby Mary made it snow in August in Rome.

Variant forms of the name include the Spanish Nevara and the Portuguese Neves.

Nieves is uncommon as a baby name for girls. It is not in the top 1000 names. 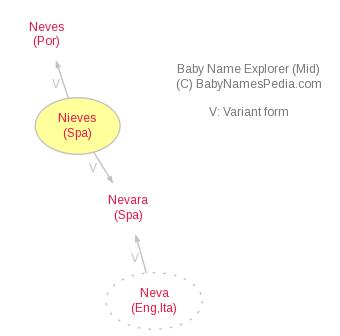