What does Nigel mean?

[ 2 syll. ni-gel, nig-el ] The baby boy name Nigel is pronounced as NAY-JHehL †. Nigel is largely used in the English and Spanish languages, and it is derived from Celtic origins. It is derived from the element 'niadh' meaning champion, cloud, passionate. The name developed as a Latinized form of the vernacular Niel, or Nihel, after the Norman Conquest; in medieval manuscripts, it was often recorded as Nigellus (Latinized) and other early forms such as Nigelle and Nygell. It has sometimes been incorrectly associated with the Latin 'niger' meaning 'black'. The name was widely used in the Middle Ages, and it later saw a revival in the 19th century.

Nigel is an English variant of the name Neil (Dutch, English, Irish, and Scottish).

The name Nigella (English) is the female equivalent of Nigel.

Nigel has 19 variants that are used in English and other languages. Variants used in English include Niegel, Nigal, Nigale, Nigele, Nigell, Nigella, Nigellus, Nigiel, Nigil, Nigle, Nijel, Njal, Nygal, Nygel, Nygell, Nyigel, and Nyjil. The short form Nige is another English variant. A variant of Nigel in other languages is Niguel (Spanish).

Nigel is a rare baby name for boys. At the modest peak of its usage in 1994, 0.022% of baby boys were given the name Nigel. It ranked at #478 then. The baby name has since fallen from favor, and is now of irregular use. In 2018, out of the group of boy names directly linked to Nigel, Neil was the most widely used. 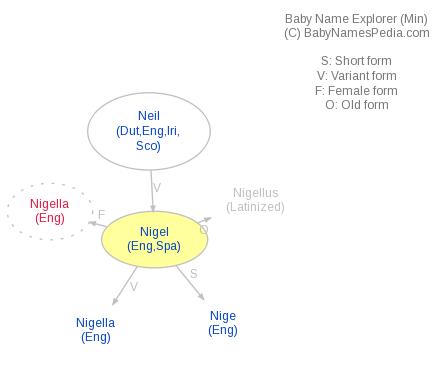