What does Nike mean?

[ 2 syll. ni-ke, nik-e ] The baby girl name Nike is also used as a boy name. It is pronounced as NIY-Kiy- †. Nike is of Old Greek and Latin origin. It is used mainly in English, German, and Greek. Old Greek origin: It is derived literally from the word nike which is of the meaning 'victory'. The name was borne in Greek mythology by the goddess of victory. It is today often associated with the American manufacturer of athletic merchandise.

In addition, Nike is a form of the English, German, Romanian, and Spanish Victoria in the Greek language.

Nike is uncommon as a baby girl name. It is not in the top 1000 names. Among the family of girl names directly related to Nike, Victoria was the most popular in 2018. 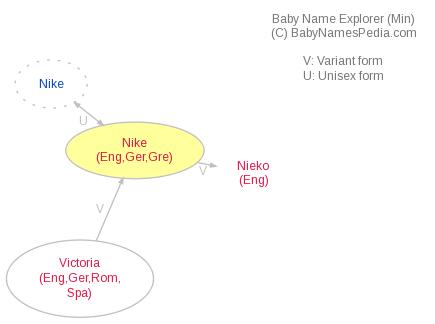