What does Niko mean?

[ 2 syll. ni-ko, nik-o ] The baby boy name Niko is pronounced as NIY-Kow †. Niko is used chiefly in Finnish, German, and Slavic. Its origin is Old Greek.

The name Nieko (English) is a variant of Niko.

Variant forms share the origin and meaning of Niko.

Niko is rather popular as a baby boy name. The name's popularity has been growing since the 2000s. Its usage peaked modestly in 2018 with 0.028% of baby boys being named Niko. It was #515 in rank then. In 2018, among the family of boy names directly related to Niko, Nicholas was the most regularly used. It was 9 times more widely used than Niko in that year. 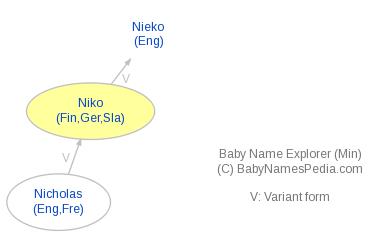