What does Nina mean?

Nina is used predominantly in the English, French, German, Italian, Polish, Russian, and Swahili languages, and its origin is Italian. The name developed as a short form of names ending in '-nina'. Another possible origin is from the Spanish 'nina' meaning 'little girl'. The name was first taken up by English speakers in the 19th century.

The name Nina is used to a great extent; it has 26 variations that are used in English and other languages. Variations used in English include Neena, Neenah, Neina, Nena (used in German as well), Nenah, Neneh, Nenna, Ninacska, Ninah, Nineta, Ninete, Ninetta (used in Italian as well), Ninja, Ninna, Ninnetta, Ninnette, Ninochka, Ninosca, and Nyna. The pet form Ninette (used in French as well), and the variant spelling Niina are other English forms. Ninka (Polish), Ninoska (Russian), and Ninotchka (Russian) are foreign variations of Nina. Specific foreign variants include the pet forms Ninon (French) and Ninoshka (Russian).

Nina is a pet form of the name Ann (English and Greek).

Nina is also a variation (English and Hungarian) of Anna.

Nina is also a variation (Polish) of the name Jean (English and Scottish).

Nina is a classic favorite. At present it is still fairly popular as a baby name for girls, though it was in more widespread use in the past. Its usage peaked modestly in 1902 with 0.132% of baby girls being given the name Nina. Its ranking then was #145. The baby name has since experienced a fall in frequency, and it is of occasional use in recent years. In 2018, its usage was 0.055% and its ranking #319, but it was nonetheless the 2nd most popular after Anna, among all girl names in its group. In 2018, its use outnumbered Nina's by 4 times. 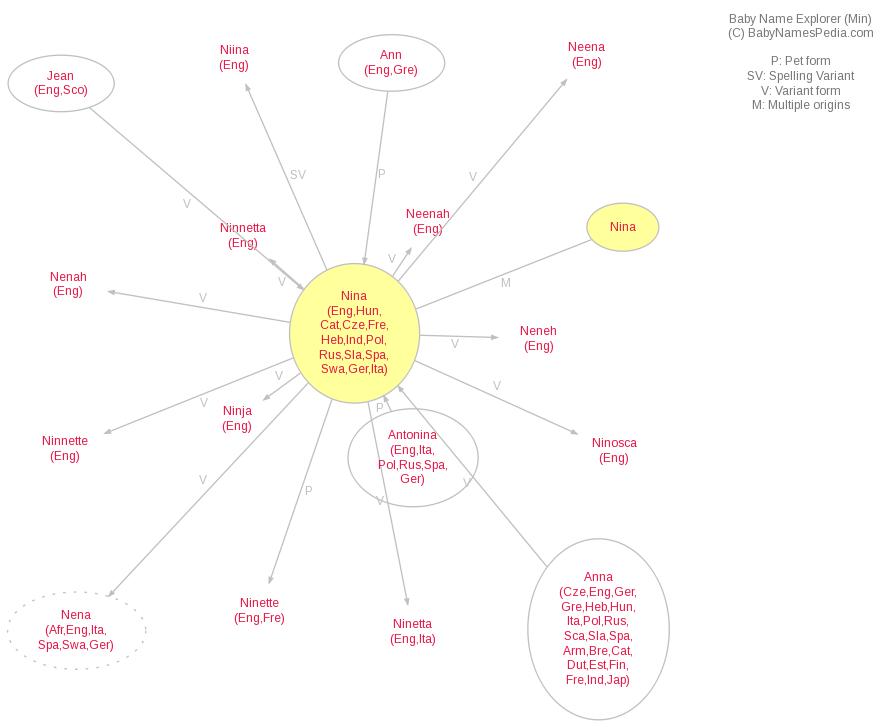