What does Noel mean?

[ 2 syll. noe(l), no-el ] The baby boy name Noel is sometimes used as a girl name. Its pronunciation is NowEHL †. Noel is used chiefly in the Spanish, English, and German languages, and it is derived from Hebrew and Latin origins. From Latin roots, its meaning is born on Christmas - in this context, Noel can be used in the English and German languages. Natalis (Latin) and Nouel (Old French) are old forms of Noel. The name is derived from 'noël', the French word for Christmas, and ultimately of the Latin 'natalis' and 'natale domini'. The name was traditionally given to babies born during the Christmas season.

In addition, Noel is a variant of the name Noah (English, German, Hebrew, and Slavic) in the Spanish language.

The name Natalie (English, French, and German) and the name Noelle (English and French) are the female forms of Noel.

Noel is a classic favorite. At present it is still fairly popular as a baby name for boys, though not to the extent it was before. The name's popularity has been rising since the 1900s; before that, it was of occasional use only. At the modest peak of its usage in 2014, 0.044% of baby boys were given the name Noel. Its ranking then was #356. In 2018, its usage was 0.041% and its ranking #405. Out of the group of boy names directly linked to Noel, Noah was the most commonly used. In 2018, its use outnumbered Noel's by 23 times. Noel has predominantly been a baby boy name in the past century. In 1998, 93% more baby boys than girls were given the name Noel. 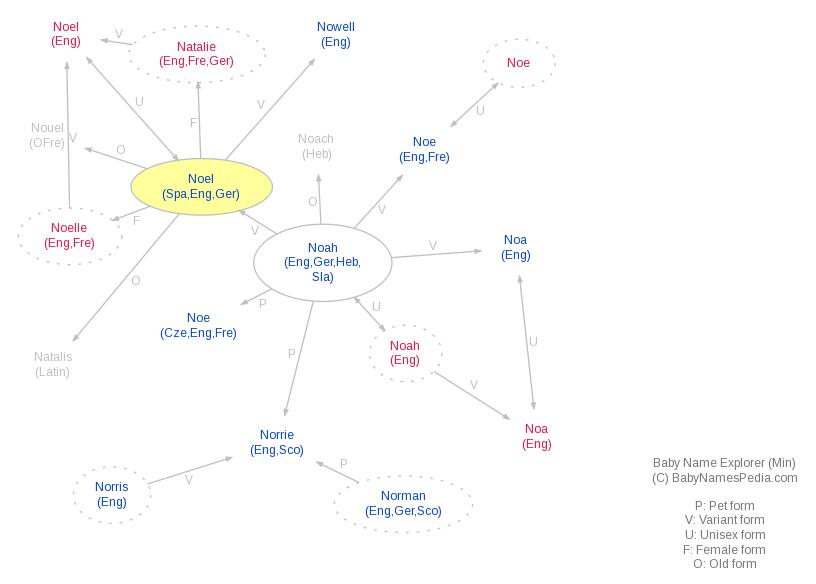