What does Nola mean?

[ 2 syll. no-la, nol-a ] The baby girl name Nola is pronounced NOW-Laa- †. Nola has its origins in the English, African-Mende, Celtic, and Latin languages. It is used largely in English, Irish, Italian, and Mende. From Celtic roots, its meaning is 'descendant of Nualláin' - in this context, Nola can be used in the English, Irish, and Italian languages. It is derived from the word nuall with the meaning 'famous, champion, chariot-fighter'. The first name was possibly invented as a feminine variant of Nolan. Among English speakers, the name is most regularly used in Australia.

Nola is also a form of the English Magnolia.

Nola is also a form of the Mende Nilla.

Nola is also a form of the English, German, and Italian Olivia in the English language.

Nola is the feminine form of the English and Irish Nolan.

Nola is rather popular as a baby girl name. At the modest peak of its usage in 1904, 0.048% of baby girls were named Nola. It had a ranking of #265 then. The baby name has suffered a substantial drop in popularity since then, and is of only infrequent use in recent times. In 2018, it ranked at #644 with a usage of 0.025%. Out of the family of girl names directly related to Nola, Olivia was the most popular. It was 39 times more popular than Nola in 2018. 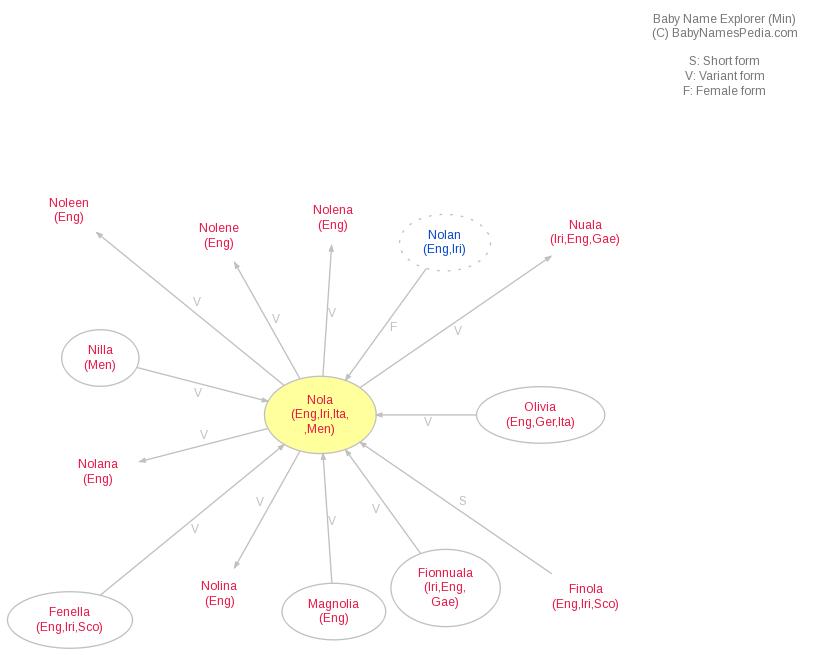