What does Nora mean?

[ 2 syll. no-ra, nor-a ] The baby girl name Nora is pronounced as NOWR-ah (English) or NOW-Raa (German) †. Nora is primarily used in the English, German, Irish, Italian, Scandinavian, Scottish, Czech, and Armenian languages. Its language of origin is Old Provençal, Old Greek, and Latin. From Latin roots, its meaning is honored, honorable - in this context, Nora can be used in the Armenian, English, German, Irish, Italian, Scandinavian, and Scottish languages. It is derived from the word 'honor' meaning honor, valor. The name first developed as an Irish form of Honora; it was later also taken as a form of Eleanor or Leonora. It has long been used as an independent name, and was first adopted by English speakers in the 19th century. Despite its origin, the names Nora and Nóra have been especially associated with Ireland. In Scotland, it is also used as a feminine form of Norman. The name has been borne by fictional characters such as Nora Helmer in the Henrik Ibsen play A Doll's House (1879) who made the name well-known in Scandinavia, Nora Clitheroe in the Sean O'Casey play The Plough and the Stars (1926), and Nora Batty in the long-running British sitcom comedy The Last of the Summer Wine (1973-).

Nora is also an English, German, Irish, Italian, Scandinavian, and Scottish short form of the German, Greek, Italian, English, and Spanish name Leonora as well as a form of the English name Helen.

Nora is also an English, German, Irish, Italian, Scandinavian, and Scottish short form of the English and Irish name Honora.

The name Nora is used to a great extent; it has 32 forms that are used in English and other languages. Forms of Nora used in English include Lanora, Neorah, Noirin, Nor, Norabel, Norah (used in Irish as well), Noreena, Noreh, Norella, Norelle, Norena, Norie, Norine, Norissa, Norlene, Norline, Norma, Normee, Normi, Normie, Normina, Norra, Norri, and Norrie. The familiar forms Nonie, Noreen (used in German, and Irish as well), Norene (used in Irish as well), and Norry are other English variants. Foreign forms include the Finnish Noora and the Irish Nóra. Specific foreign variants include the familiar forms Norina (Italian) and Nóirín (Irish). 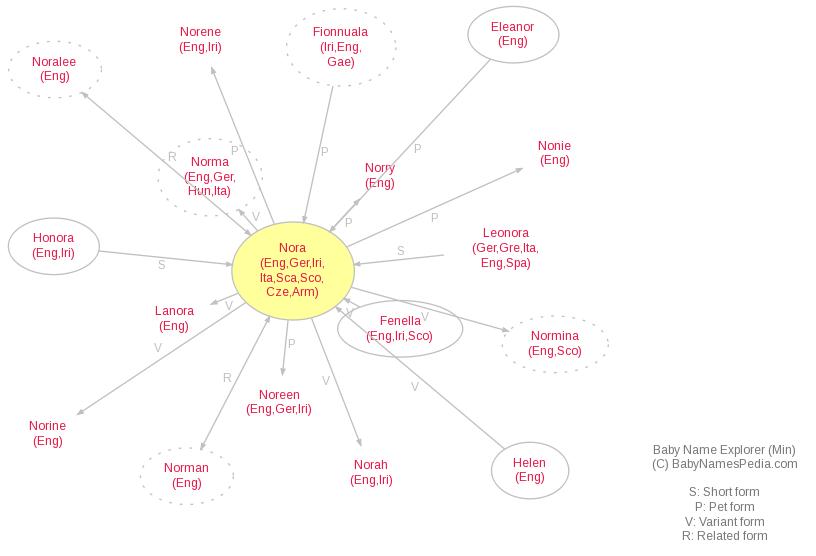