What does Norbert mean?

[ 2 syll. nor-ber(t), no-rbe-rt ] The baby boy name Norbert is pronounced NOWR-BahRT (English), NAOR-BahRT (Dutch), or NAOR-BehRT (German, Polish) †. Norbert is of Germanic origin, and it is used largely in the English, German, and Polish languages. The name is of the meaning 'famous Northman'. It is a two-element name derived from nord meaning 'north' ; berht 'bright, famous'. An old form of Norbert is Nordbert (Germanic). The name was borne by Saint Norbert of Xanten (1080-1134), the founder of the Norbertine order of monks. The name was introduced by the Normans into England in the 11th century, and it was later among the many Germanic medieval names revived in the 19th century.

Norbert has 16 derivatives that are used in English and foreign languages. Derivatives used in English include Norb, Norbe, Norbea, Norbee, Norberte, Norberth, Norberthe, Norberto (used in Italian and Spanish as well), Norbey, Norbi, Norbie, and Norby. The pet forms Bert (used in Dutch, Polish, and Scandinavian as well), Bertie, and Berty are other English variants. The Polish Bercik is a derivative of Norbert that is in foreign languages.

Norbert is rare as a baby name for boys. At the modest peak of its usage in 1922, 0.056% of baby boys were given the name Norbert. Its ranking then was #207. The baby name has since substantially fallen in popularity, and is currently used only on an infrequent scale. Out of all boy names in its group, Norbert was nonetheless the most popular in 2018.

Baby names that sound like Norbert include Norberte, Norberth, Norberthe, and Norberto. 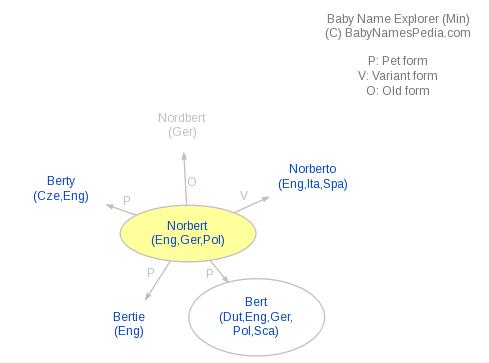