What does Norman mean?

[ 2 syll. nor-man, no-rm-an ] The baby boy name Norman is also used as a girl name, but the use for boys is much more common. Its pronunciation is NAORMahN †. Norman is largely used in the English, German, and Scottish languages, and its origin is Germanic and Old Norse. From Germanic roots, its meaning is Northman, Norseman, Norman, Viking, northerner. A two-element name, it is from the elements 'nord' meaning north ; 'man'. Nordman (Germanic) is an older form of Norman. The first name is generally derived from 'Northman' in reference to the Vikings in the area from modern-day Normandy who conquered England in the 11th century; they were commonly known as the Normans after the Conquest. The invading Normans were originally Scandinavian settlers from France, but the name Norman was already in use in England prior to the Conquest as a byname for Scandinavian settlers in England. The use of the name became more widespread after the Conquest. It fell into decline by the 14th century before seeing a revival in the 18th century. The appearance of the fictional character Norman May in C. M. Yonge's novel 'The Daisy Chain' (1856) further popularized the name. In Scotland, the name is popular among the Clan McLeod, and it is also taken as the Anglicized version of Tormod; this usage was similarly introduced by Norse conquerors to Gaelic speakers.

Norman is an English variant of the name Tormod (Scandinavian, Scottish, and Gaelic).

The name Normina (English and Scottish) is the female equivalent of Norman.

Norman has 19 variants that are used in English and other languages. Variants used in English include Normand, Normando, Normano, Norme, Normea, Normee, Normen, Normey, Normi, Normin, Normon, Normun, Normy, and Normyn. The short form Norm, the diminutive form Normie, and the variant spelling Normann (also used in German) are other English forms. A variant of Norman in other languages is Tormod (Scandinavian and Scottish). Another foreign variant is the diminutive form Norrie (Scottish).

Norman is an uncommon baby name for boys. At the height of its usage in 1931, 0.507% of baby boys were given the name Norman. It ranked at #36 then. The baby name has since fallen from favor, and is now of very modest use. Within all boy names in its group, Norman was nonetheless the most popular in 2018. In the past century Norman has mostly been a baby boy name. In 1929, the name Norman was given to 97 times as many baby boys than girls. 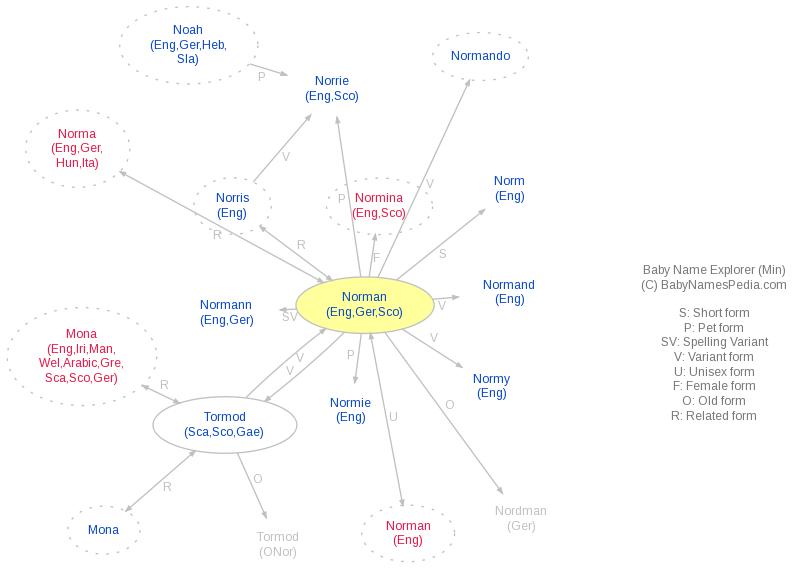