[ 3 syll. nor-mi-na, no-rm-ina ] The baby girl name Normina is pronounced NaoRMIY-Naa- †. Normina's language of origin is Latin and Germanic. It is predominantly used in English and Scottish. From Germanic roots, its meaning is 'Northman, Norseman, Norman, Viking, northerner' - in this context, Normina can be used in the Scottish language. It is derived from nord which means 'north' ; man.

In addition, Normina is a form of Nora.

Normina is also a form of the English, German, Hungarian, and Italian Norma in the English language.

Normina is the feminine form of the English, German, and Scottish Norman.

A form of the name is the Scottish Normanna.

Another variant of Normina is the Scottish contracted form Mina.

Normina is an uncommon baby girl name. It is not in the top 1000 names. In 2018, out of the family of girl names directly related to Normina, Nora was the most widely used. 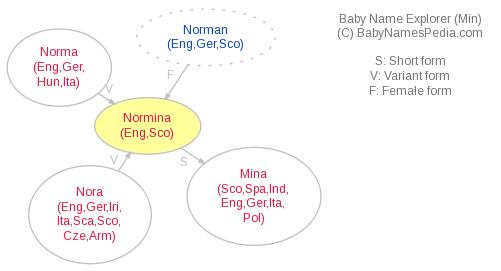