What does Odelia mean?

Odelia's origin is Germanic, and its use, Dutch, English, and Hebrew. Older forms of the name include Odila (Germanic) and Otila (Germanic). The name can be derived from the element uod (meaning 'wealth, fortune') or 'othal'. It was borne by an 8th-century nun who founded a Benedictine convent in Alsace, France, and subsequently gave her name to the Odilienberg peak where the monastery was built. She is also the patron saint of Alsace. Odelia is the feminine form of the French Odile.

Odelia's language of origin is Hebrew, and it is used largely in the English and Hebrew languages. Here, it means 'praise God'.

Odelia's language of origin is Old Greek. It is derived from the word oide meaning 'song'. The element 'oide' is the root for the English word 'ode'; it originally refered a chorus sung at a public performance.

Odelia's origin is Old English. Meaning: 'woad hill'. It represents the transferred use of the geographic name and the surname as a given name. Odelia is the feminine form of the English Odell.

Odelia is a rare baby girl name. At the modest peak of its usage in 1907, 0.009% of baby girls were named Odelia. It had a ranking of #705 then. The baby name has experienced a decline in popularity since then, and is used only on an infrequent scale today. Out of all girl names in its family, Odelia was nevertheless the most widely used in 2018. 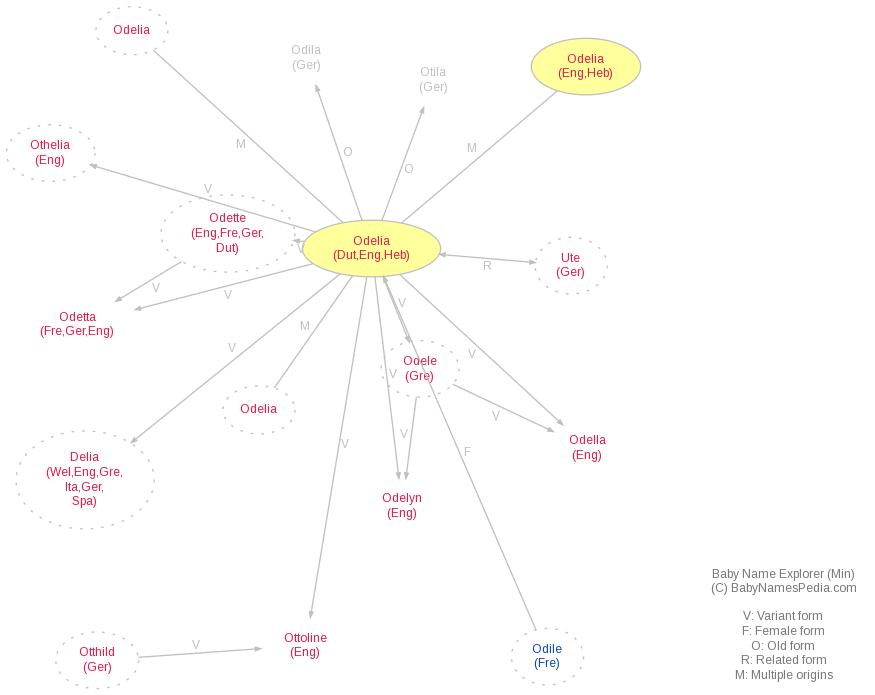