What does Olena mean?

[ 3 syll. o-le-na, ol-ena ] The baby girl name Olena is pronounced as ahLYEHN-aa- or ow-LEHN-aa- †. Olena is largely used in the Russian and Ukrainian languages. It is derived from Old Greek and Latin origins.

In addition, Olena is a Russian and Ukrainian variant transcription of the name Helen (English).

Olena is also a Russian variant transcription of the name Lilian (English, French, and German).

Variant forms inherit the origin and thus the meaning of Olena.

Olena is not frequently used as a baby girl name. It is not listed in the top 1000. In 2018, out of the family of girl names directly linked to Olena, Helen was the most regularly used. 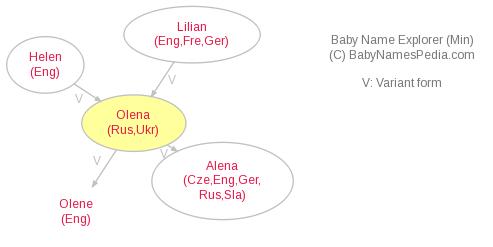