What does Oleta mean?

[ syll. o-le-ta, ol-eta ] The baby girl name Oleta is pronounced OWLEHTAH †. Oleta is of Old Greek and Latin origin, and it is used largely in the English language.

Oleta is a variation of Alethea (English).

Oleta is also a variation of Olivia (English, German, and Italian).

Oleta is rare as a baby name for girls. At the peak of its usage in 1913, 0.020% of baby girls were given the name Oleta. It ranked at #429 then. The baby name has since suffered a substantial decline in popularity, and is currently of only very modest use. In 2018, out of the group of girl names directly linked to Oleta, Olivia was the most popular. 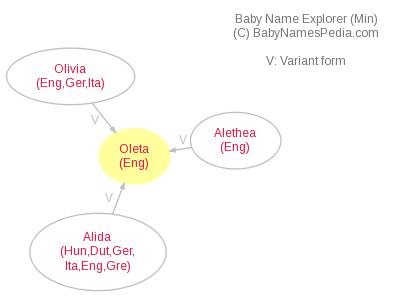