What does Ophelia mean?

[ 4 syll. op-he-lia, oph-el-ia ] The baby girl name Ophelia is pronounced owFIY-Liy-aa- †. Ophelia's origin is Old Greek, and its use, English, German, and Italian. Ophelos (Old Greek) is an older form of the name. The name is derived either from the Greek ophelos (meaning 'help, profit') or ophis. The name could have been invented in the 16th century by the Italian poet Jacopo Sannazzaro (1458-1530), possibly as a feminine form of the Greek ophelos (meaning 'help, profit'). The name was later used by Shakespeare for the beautiful but ill-fated daughter of Polonius in Hamlet (1599). The name was first adopted on a modest scale by English speakers in the 19th century; it was then mostly used by Afro-Americans.

Ofelja (Polish), Ofélia (Portuguese), Ophélie (French), and Ovelia (Spanish) are variant transcriptions of Ophelia that are used in foreign languages. The spelling variant Ofelia (Spanish) is another foreign form.

Ophelia is fairly popular as a baby name for girls, and it is also perceived to be trendy. In 1900, 0.047% of baby girls were named Ophelia. Its ranking then was #268. The baby name has since experienced a substantial decline in popularity. In 2018, it ranked at #373 with a usage of 0.045%, enjoying a minor resurgence in the recent decade. Within all girl names in its group, Ophelia was the most widely used. 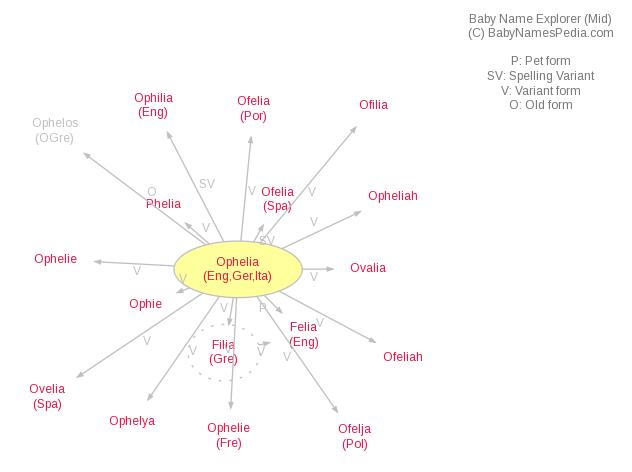