What does Oren mean?

[ 2 syll. o-ren, or-en ] The baby boy name Oren is pronounced as AOR-ehN †. Oren is used predominantly in the English and Hebrew languages, and its origin is Celtic, Hebrew, and Old Greek. From Hebrew roots, its meaning is pine tree.

Oren is a variant (English) of the name Oran (English and Irish).

Oren is also a variant of the name Orrin (Irish and English).

The name Orna (Hebrew) is the female version of Oren.

Oren is rare as a baby name for boys. At the modest peak of its usage in 1903, 0.022% of baby boys were given the name Oren. It ranked at #366 then. The baby name has since suffered a substantial fall in popularity, and is currently of sporadic use. Out of all boy names in its group, Oren was nonetheless the most frequently used in 2018. 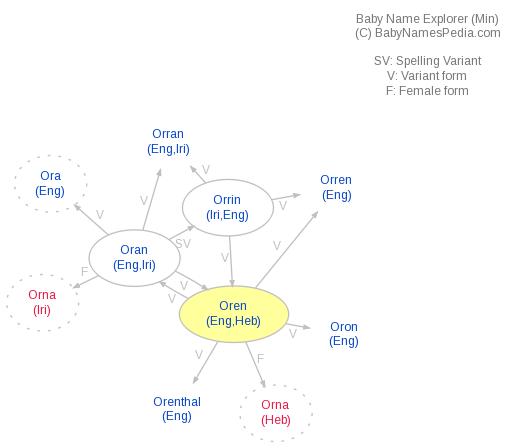