What does Orlando mean?

[ 3 syll. or-lan-do, orl-a-ndo ] The baby boy name Orlando is pronounced as aoRLAENDuw †. Orlando is largely used in the English, German, Italian, and Spanish languages, and it is derived from Germanic origins. The name was first derived as an Italian version of Roland, and it has subsequently been adopted by English speakers since the medieval period. The name has been used much in the literary world, appearing in epic romance poems such as Boiardo's Orlando Innamorato (1495) and Ariosto's Orlando Furioso (1516). The name has also been used by Shakespeare for the hero of his comedy As You Like It (1599), and by Virginia Woolf for the titular hero of her most commercially successful novel Orlando (1928). A city in Florida also bears this name.

Orlando is an English, German, Italian, and Spanish variant of the name Roland (English, French, German, and Welsh).

The name Orlanda (Italian) is the female equivalent of Orlando.

Orlando has 20 variants that are used in English and other languages. Variants used in English include Arlando, Landi, Olando, Orlan, Orland, Orlanda, Orlandas, Orlande, Orlandis, Orlandito, Orlandos, Orlandus, Orlo, Orlon, Orlond, Orlonde, and Orlondo. The short form Lando (also used in Portuguese, and Spanish) is another English variant. A variant of Orlando in other languages is Ordando (German, Italian, and Spanish). Another foreign variant is the short form Olo (Spanish).

Variant forms inherit both the origin and meaning of Orlando.

Orlando is a classic favorite. Currently it is still a fairly popular baby name for boys, though it was in more widespread use previously. The name's popularity rose from the 1940s up to the 1970s. At the modest height of its usage in 1975, 0.052% of baby boys were given the name Orlando. It ranked at #248 then. The baby name has since experienced a fall in popularity. In 2018, its usage was 0.020% and its ranking #666. Within the group of boy names directly linked to Orlando, Roland was the most popular. In 2018, it was used 35% more than Orlando. 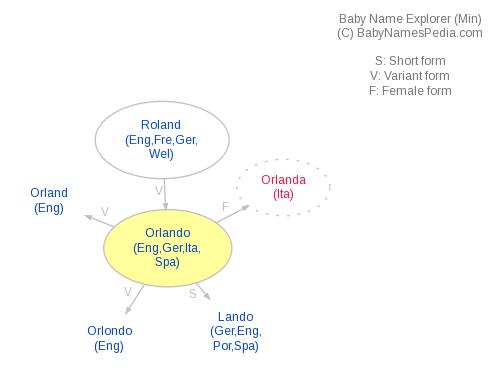