What does Oscar mean?

[ 2 syll. os-car, osc-ar ] The baby boy name Oscar is pronounced as AAS-KahR in English †. Oscar is used predominantly in English, French, Gaelic, Irish, and Scandinavian. Its origin is Old Norse. The meaning of Oscar is god spear; gentle friend. The source is Asgeirr (Old Norse), itself derived from the elements 'as' (meaning god, deity) and 'geirr' (spear, spear head), cognate with the Old English 'ansfar' also meaning 'god spear'. Another derivation suggests that the name is from the Old Irish 'os' and 'cara'. It was borne in Irish mythology by the warrior son of Ossian and Niamh, later popularized by the poet James Macpherson, who published the poems in the 1760s under the guise of Ossian himself. The name was bestowed by Napoleon, himself an admirer of Macpherson's works, on his godson Joseph François Oscar Bernadotte (1799-1859), who later became King Oscar I of Sweden. The name, together with the variant Oskar, was thereafter popularized throughout Scandinavia. It was later known in the UK from the Irish writer Oscar Wilde (1854-1900), who was bestowed the name by his godfather King Oscar II of Sweden.

Oscar has 23 variations that are used in English and other languages. English variations of Oscar include Oscarito, Oscer, Osckar, Oscker, Osker, Oszcar, Ozcar, and Óscar. Other English variants include the contracted form Os, and the familiar forms Ocky, Ossie, and Ozzy.

Oscar is a classic favorite. Today it is still a popular baby boy name, but not as much as it was previously. At the height of its usage in 1901, 0.365% of baby boys were named Oscar. It was #47 in rank then. The baby name has slipped in popularity since then, and it is used on a modest scale in recent times. In 2018, its usage was only 0.101% and its ranking #206, but it was nevertheless the most regularly used within all boy names in its family. 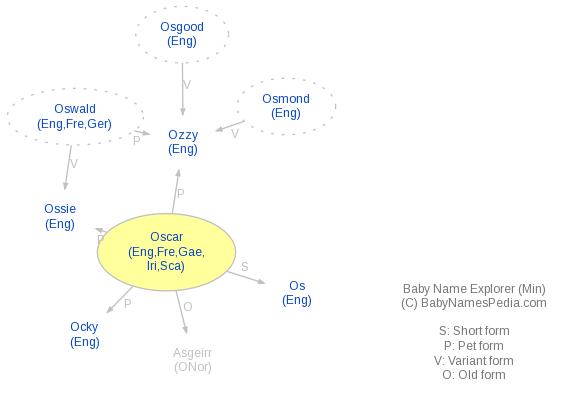