What does Oswald mean?

[ 2 syll. o-swal(d), os-wa-ld ] The baby boy name Oswald is pronounced as AAZ-WaoLD (English) †. Oswald is used chiefly in the English, French, and German languages, and its origin is Germanic. The name's meaning is divine power, rule of God. A two-element name, it is derived from the elements 'ans' meaning God ; 'wald' to rule. Answald (Germanic) is an old form of Oswald. The name has been used in England before the Norman Conquest. It was borne by two saints, Oswald of Northumbria (604-642), the first Anglo-Saxon king venerated as a saint, and Oswald of Worcester (-992), Archbishop of York. The name fell into disuse after the medieval period, and it later saw a moderate revival in the 19th century. The name Osvalda (German and Italian) is the female form of Oswald.

Oswald has 19 variants that are used in English and other languages. Variants used in English include Ossie, Osvald, Osvalde, Oswal, Oswalde, Oswaldo (used in Italian and Spanish as well), Oswall, Oswallt, Oswalt, Osweald, Osweld, Oswell, and Oswold. The diminutive forms Oz, Ozzie (used in German as well), Ozzy, and Waldo (used in German as well) are other English variants. Osbaldo (Spanish) and Osvaldo (Italian and Spanish) are foreign variants of Oswald.

Oswald is rare as a baby name for boys. At the modest peak of its usage in 1909, 0.014% of baby boys were given the name Oswald. It ranked at #529 then. The baby name has since substantially declined in popularity, and is today of infrequent use. Out of all boy names in its group, Oswald was nonetheless the most widely used in 2018. 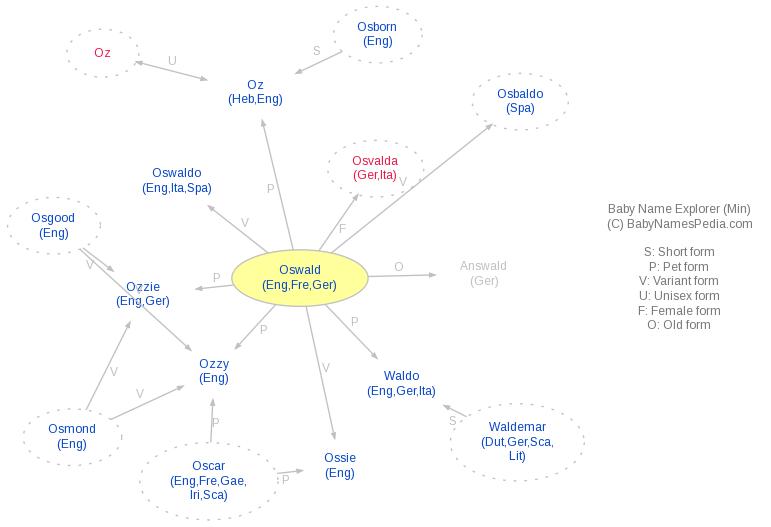