What does Otto mean?

[ 2 syll. ot-to, ott-o ] The baby boy name Otto is pronounced in English as AA-Tow or in German as AO-Tow †. Otto is used predominantly in the Czech, Dutch, English, Finnish, French, German, Italian, and Scandinavian languages, and it is derived from Germanic origins. Eudes (Old French), Oda (Old French), and Ote (Old French) are original forms of Otto. This developed as a short form of Germanic names with the first element 'uod' (meaning wealth, fortune). Odo is an earlier form of Otto. The former was borne by the half-brother of William the Conqueror, while the latter was borne by Otto the Great (912-973), the first Holy Roman Emperor. The name was popular in the medieval times, and was also known from Saint Otto of Bamberg (1060-1139), a German bishop and missionary to Pomerania. It was also borne by various members of royalty in Germany and Austria. The name was first introduced by the Normans into England in the 11th century, and it saw a modest revival in the 19th century. The term Otto has sometimes been used as a derogatory name for Germans in general. Like most Germanic names, the use of the name has declined among English speakers since World War I. The name Otha (English) and the name Ute (German) are the female versions of Otto.

Otto is a widely used name; it has 37 variants that are used in English and other languages. Variants used in English include Otess, Otha, Otis, Otoe, Otón, and Ottis. The pet form Othello (used in French, Italian, and Spanish too) is another English variant.

Otto is fairly popular as a baby name for boys, and it is also viewed as trendy. Its usage peaked in 1902 with 0.145% of baby boys being given the name Otto. Its ranking then was #101. The baby name has since experienced a marked loss in popularity. In 2018, its usage was 0.036% and its ranking #430, appearing with somewhat increasing regularity in the recent decade. Among all boy names in its group, Otto was the 2nd most popular after Cody. In 2018, it was 76% more frequently used than Otto. 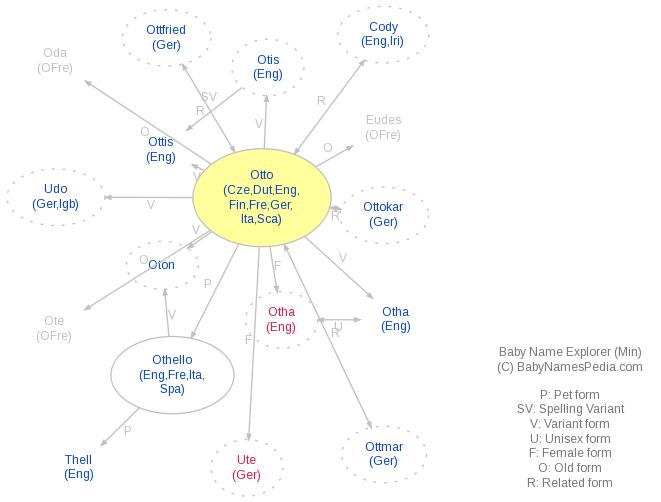