What does Ovid mean?

[ 2 syll. o-vid, ov-id ] The baby boy name Ovid is pronounced in English as AA-VihD †. Ovid is of Latin origin and it is used largely in the English language. It is from the element ovis meaning 'sheep'. The first name is derived from the Roman family name Ovidius (Latin). The name was borne by Publius Ovidius Naso (43-17 BC), a Roman poet better known as Ovid; he wrote on many topics including love, abandoned women, and mythology.

Ovid has 13 variations that are used in English and foreign languages. Variations used in English include Ofid, Ofidd, Ofyd, Oved, Ovi, Ovidiu, Ovido, Ovyd, Ovydio, Ovydiu, and Ovydo. Ofydd (Welsh) and Ovidio (Basque and Italian) are foreign variations of Ovid.

Ovid is unusual as a baby name for boys. Its usage peaked modestly in 1907 with 0.006% of baby boys being given the name Ovid. Its ranking then was #984. The baby name has since experienced a decline in popularity, and is currently of only very light use. Among all boy names in its group, Ovid was nonetheless the most commonly used in 2018. 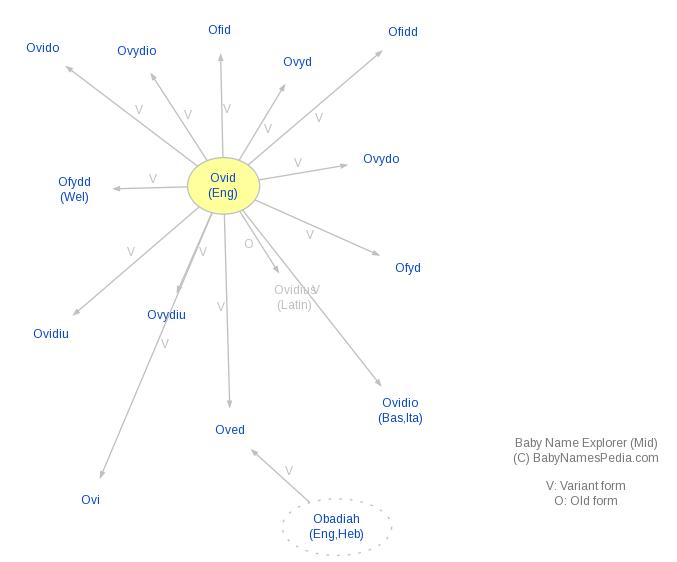