What does Owen mean?

[ 2 syll. o-wen, ow-en ] The baby boy name Owen is pronounced as OWAHN †. Owen is used predominantly in the English, Irish, and Welsh languages, and it is derived from Celtic, Old Greek, and Welsh origins. Welsh origin, English and Welsh use: The name is of debated origin; it could be of the Welsh 'oen' or 'eoghunn', or else it could have evolved as a Welsh form of Eugene in the sub-Roman era, or else it could be from an Old Celtic name meaning 'born of Esos' in reference to the minor Celtic god Esos or Aesos from Gaul. The older form of the name, Owain (Welsh) or Yvain (Welsh), was borne by a knight of the Round Table and son of King Urien in Arthurian legend. It was also borne by the Welsh revolutionary Owain Glyndwr (1354-1416), whose name was Anglicized by Shakespeare as Owen Glendower. Owain is still sometimes encountered in today's use.

In addition, Owen is a variant (English, Irish, and Welsh) of the name Eoghan (Gaelic, Irish, and Scottish).

Owen is also a variant (Welsh) of the name Eugene (English and French).

Owen is also a variant (Welsh) of the name Evan (Scottish, English, and Welsh).

The name Owena (Welsh) is the female version of Owen. 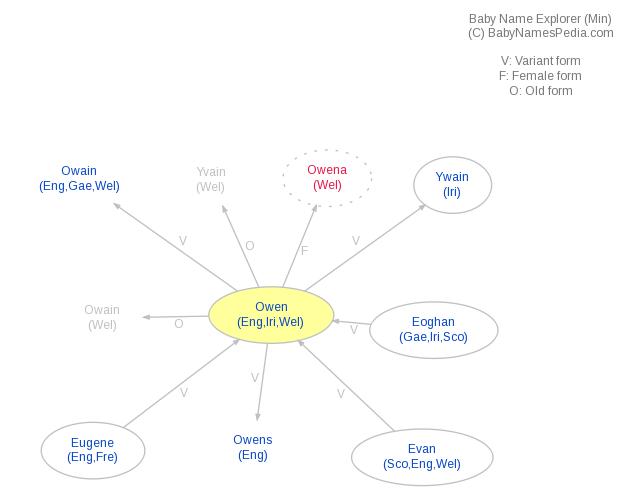